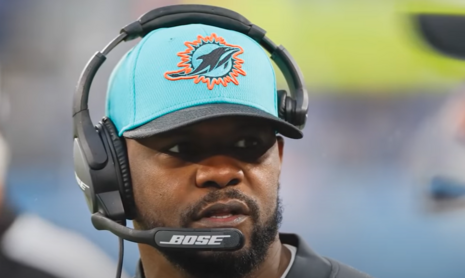 Fired recently after three seasons as head coach of the Miami Dolphins, Brian Flores unleashed a bombshell on his way out of the National Football League. In a 58-page lawsuit filed Tuesday in the U.S. District Court’s Southern District of New York, he accused his former team of tampering, tanking and racism. He extended that racism charge to the entire National Football League as well and says the Rooney Rule requiring interviews of minority coaching candidates is a sham.

Flores, who compiled a 24-25 record with Miami, accused team owner Stephen Ross of offering him $100,000 per loss in the 2020 season so the Dolphins could have the worst record in the league and gain the No. 1 pick in the subsequent draft. "That was a conversation about not doing as much as we needed to do to win football games," Flores said Wednesday. "'Take a flight. Go on vacation. I'll give you $100,000 per loss.' Those were his exact words."

If these allegations are true, it’s an incredible blight upon Miami’s and the NFL’s integrity. People would have paid good money to attend rigged games.

The black Latin coach’s suit includes the incendiary language that the NFL “is racially segregated and is managed much like a plantation” from America’s pre-Civil War South.:

“Its 32 owners — none of whom are black — profit substantially from the labor of NFL players, 70 percent of whom are black. The owners watch the game from atop NFL stadiums in their luxury boxes, while their majority-black workforce put their bodies on the line every Sunday, taking vicious hits and suffering debilitating injuries to their bodies and their brains while the NFL and its owners reap billions of dollars.”

Outkick’s NFL writer Armando Salquero called Flores’ charges “mind-blowing allegations, and it gets uglier for Ross because Flores also claims the team owner asked him to violate the NFL’s tampering policy. Ross allegedly wanted to recruit a ‘prominent quarterback,’ who everyone now understands to be Tom Brady, to the Dolphins.”

The Rooney Rule was devised in hopes of increasing the number of minority head coaches and general managers in the NFL, but Flores poured gasoline all over it. He said that when he previously interviewed with the Denver Broncos, ex-general manager John Elway and team president Joe Ellis showed up late to the interview and were either hung over or drunk. He regards that experience a token nod to the Rooney Rule by a team that had no intention of hiring him.

Flores also had an interview lined up with the New York Giants. However, before it happened, he received a text message from Patriots’ Coach Bill Belichick congratulating him on landing that job. The New England coach misspoke though because the Giants had already hired the white “Brian” Daboll to be their new head coach. So, Flores charges that his interview with the Giants was another hollow attempt by a team to show compliance with the Rooney Rule.

Appearing today on ESPN’s “Get Up” show, Flores said of the Giants’ situation:

“Disbelief. Humiliation. That was a tough pill to swallow. I have a great amount of respect for Bill and Brian Daboll. I was upset that I wasn’t getting a true opportunity to show what I can bring to a team. … If change comes, and I never coach again, it'll be worth it."

The Giants claimed Flores was in consideration for their coaching job until the 11th hour.

Salguero responded that the teams have “no exact science” in selecting coaches who are the best fits for their teams. Furthermore, he said Flores will have difficulty proving racism in court – if the case gets that far. The Outkick writer believes the NFL may try to squash it before the discovery phase. Also, he wrote that Flores is a black man who had been hired as a head coach, along with several other blacks hired for leadership positions.

In a January 2019 column for the Miami Herald, Salguero reported that the words “tank” and “tanking” were “expressly used in at least one head coach interview conducted by Ross and his group.” The Dolphins dismantled their 2018 roster and did little to rebuild it for 2019. It was “understood the Dolphins weren’t trying to field a competitive team,” Salguero says.

Miami issued a statement Tuesday refuting the tanking charge: “The implication that we acted in a manner inconsistent with the integrity of the game is incorrect. We will withhold further comment on the lawsuit at this time.” The NFL said Flores' charges are "without merit."