NFL Cozies Up To LGBTQ With Thursday Night Fluff Piece 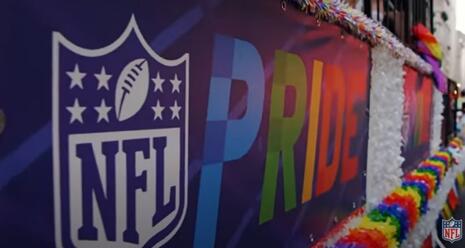 The NFL wasn’t whistling Dixie earlier this year when it released a video identifying as gay, lesbian, queer and transgender. The NFL Network is following up on that bizarre PSA by running a GLAAD-pleasing feature right after Thursday’s 49ers-Titans game. The program, which replays Dec. 28, will profile five LGBTQ people on the impact of the Las Vegas Raiders’ Carl Nassib coming out of the closet earlier this year.

The “NFL 360” segment is hosted by Melissa Stark and titled, “We Are All Human.” Featured will be former NFL player Ryan O’Callaghan, who came out after playing for the Patriots and Chiefs; Avery Saffold, who played for Amherst College; NFL Senior Diversity and Inclusion Director Sam Rapoport; Casey Pick, Senior Fellow for Advocacy and Government Affairs at The Trevor Project; and Jake Streder, who played at Matea Valley High School in Aurora, Ill.

The NFL Network appearance will be the perfect way for Streder to end his prep career and take LGBTQ pride to the house. “They gave me this incredible gift to pay it forward and be a voice of support and encouragement to believe in yourself and not let being LGBTQ+ hold you back,” he gushed in a story by Jim Buzinski of Outsports.

Buzinski says these experiences of the five people featured “are universal.” Rapoport gives a “touching recollection” of coming out to NFL Commissioner Roger Goodell during a Super Bowl event. Goodell was happy to see her in an affectionate hand-hold with her girlfriend. Saffold explains his growing up black and homosexual in South Chicago “where there are rampant levels of homophobia.” O’Callaghan had suicidal thoughts and went through therapy.

This NFL Network feature has got to be a very special achievement for Troy Vincent, a former pro football player and now the executive vice president of football operations for the NFL.

Vincent is practically the leader of the league’s virtue signaling to the LGBTQ cause. In October 2020, Vincent said to "all current players who are thinking of coming out, when you are ready, so are we." The NFL issued a video then as well, stating “it takes all of us.” Also, NFL Films has previously featured the "National Gay Flag Football League.”

There’s no doubt about it. The National Football League is having a gay old time.