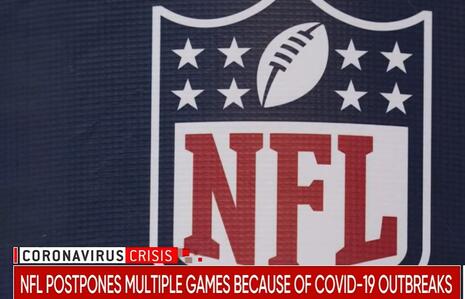 The New York Times resorted to hysterics Thursday in an editorial calling for total sports league shutdowns. The op-ed claimed the nation is “at war” with COVID-19, is losing the battle and all professional leagues should shut it down for a few months.

As reported here, the NFL, NBA and NHL are all reporting a surge in coronavirus illnesses. Some teams are getting hit especially hard, and the NFL is shuffling game scheduling due to the outbreak. In the editorial “Sports Should Take A Holiday Vacation”, the NYT suggests shutting down pro sports until February or later:

“It’s time to press pause on games, matches, and meets. If we’re genuinely interested in public health, genuinely invested in slowing the virus and saving lives, we need to look at the storm that has gathered and take shelter from it.”

The Times also demanded every professional athlete get vaccinated, though the shots have not proven effective. Mask wearing and daily testing are also necessary, the NTY argues, adding:

“It’s time for sports leagues to mandate vaccination for every player. No shot, no games or practices or hanging at team headquarters.”

While dictating what the leagues and their teams need to do to win the battle against COVID-19, the Times also said fans attending games must prove they have been vaccinated and must also wear masks.

“When we see 100,000 fans packed shoulder-to-shoulder at the biggest stadiums, a sea of unmasked multitudes, everyone screaming at the top of their lungs, what message does that send?,” the Times wrote.

This is pure ignorance. College and pro football games have allowed tens of thousands of fans to attend their games without massive spreading of the pandemic.

“We’re at war with the virus, and the sports world is among the most powerful social forces in the world,” the NYT concludes.

The NBA, NHL and NFL have higher vaccination rates than the public at large. Most pro athletes have also received booster shots. Yet none of this has prevented the current surge of infections – proving the experts are wrong and they don’t have the inside track on “science.”

Basically, the NYT demands more of the same tactics which have repeatedly failed. Doing the same thing over and over again and expecting different results is insanity. Vaccinations are not the be-all/end-all solution; they merely lessen the severity of infections in some cases. The pro leagues currently adding vaccinated players to the sick list daily demonstrates that the New York Times is wrong on practically every point it makes in the editorial.