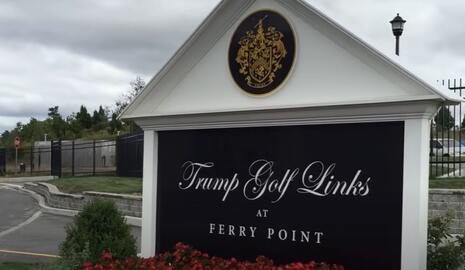 New York City Mayor Bill de Blasio is reportedly confiscating a Donald Trump golf course in the Bronx, and the former president is absolutely furious. Trump says he poured millions into the course, and the current mayor is ending the partnership in a “communistic” fashion.

“Now under Mayor De Blasio, he wants to CONFISCATE the project from me for no reason,” Trump wrote in a lengthy Twitter statement.

Mediaite writer Brandon Contes reported the golf course seizure stems from the events of the Jan. 6 “insurrection” at the U.S. Capitol. After that “unforgivable act,” the Democrat Mayor de Blasio announced plans to terminate all of his city’s contracts with the Trump organization.

The FBI has previously declared there was no insurrection in D.C. that day, but news filters slowly through the mayor’s office and Mediate.

Trump’s Tweet, appearing under the heading of “Save America, President Donald J. Trump”, angrily refutes the confiscation: “So unfair—this is what happens in Communist Countries, not in America!”

Furthermore, the 45th president explains the circumstances behind the Bronx golf course. He says that, at the request of former Mayor Michael Bloomberg, he transformed “a longtime scandal-ridden site in the Bronx” into a magnificent Jack Nicklaus Signature designed golf course. “I invested many millions of dollars, all cash, in this project in order to get it done, which I did, starting from scratch, in record time,” the former president wrote. “Mayor De Blasio wants to take it away after all of the work was so successfully done, and so much money was spent."

To replace Trump at the course, De Blasio has awarded a 13-year contract to Ferry Point Links LLC to operate the course. It  is reportedly run by homeless shelter operator CORE Services Group, Contes reported.

Golf has previously been used to undermine Trump under false pretenses this year. The PGA of America announced in January that it had stripped Trump’s New Jersey golf club of the 2022 US PGA Championship. The Guardian’s Bryan Armen Graham wrote, “The R&A followed suit the next day when it appeared to rule out Turnberry, the Scottish course that last hosted the Open championship before Trump bought it, as a future host of golf’s oldest major. In Trumpland, it’s a fate worse than impeachment itself.”

Graham went on to accuse Trump of anti-Mexican and anti-black racism, along with this incendiary zinger: “A shocking embrace of violence and chaos has ensured Trump is no longer a part of golf’s future.”

A Trump representative called the removal of events from his courses a breach of contract.