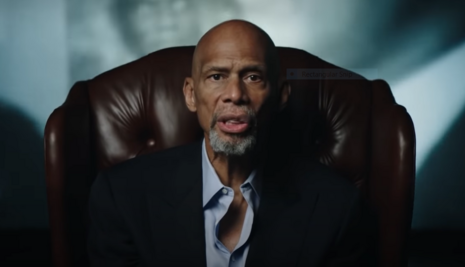 In a recent NPR interview with A. Martinez, Kareen Abdul-Jabbar managed to link coronavirus vaccinations with race, particularly Black Lives Matter. His draconian position is that NBA players and staff be removed from the team if they don't get vaccinated. In a vast understatement, Martinez said that to the former NBA player, it's about more than just the vaccine.

Martinez noted that a vocal minority of NBA players are exercising personal choice and refusing to get the shots. The NBA says it won't pay them for the games they miss, and some want the league to get even tougher on them.

Remembering the good old days of 2020 when corporations and media repeated the BLM mantra like mind-numbed robots, Abdul-Jabbar said:

“I think speaking up for vaccination is an extension of speaking up for Black Lives Matter because -- who's suffering the most in the bad economy that is caused by COVID-19? Who suffers the most deaths in the pandemic? Black people. You can see the direct correlation between saving lives through vaccination, and we can't slack at any point and take another path. There's none that works.”

Isn’t that a bit of hypocrisy for players who openly supported Black Lives Matter, who kneeled for the national anthem, to refuse the vaccine, Martinez asked. Can a player do one and not the other?

Yes, but the person who didn’t get vaccinated is ignorant and hasn’t educated himself on the topic, the wise sage Abdul-Jabbar responded.

Kyrie Irving and other non-vaccinated players who fully supported BLM beg to differ. The two issues are not conjoined at the hip. These players are showing this by their actions, by their personal discernment.

Additionally, the man for whom the NBA’s annual social justice champion award is named, said everyone must make their own choice on vaccinations. “But if you want to play professional basketball with a lot of other people who would be endangered by close contact with people who aren't vaccinated, everybody's got to slow down and say, hey, we can't allow that situation to happen. That's not fair.”

What’s also not fair is that in this NPR interview, A Martinez never broached the subject of adverse reactions to vaccines, which were fast-tracked through to federal approval. If everyone thought vaccines were safe to use, it wouldn’t be such a big issue, but that’s not the case. Oh, that’s right, leftists are doing diligent research through so-called reputable sources like Dr. Anthony Fauci and MSNBC. And unlike the unvaccinated rubes, they have all the correct information.

Isn’t it important for all the members of a team to be on the same page toward achieving the team's goals, Martinez also asked? Meaning the same left-wing, social justice, BLM, take-the-jab page. “If some players do indeed wind up holding firm on not getting vaccinated, Kareem, what do you think that could do to a team's sense of unity and trust in a locker room and on the court?”

Abdul-Jabbar took the bait and said teams with a player who is convinced the vaccines don't work, “then they have to protect themselves against that person.” No need to discuss the player’s thoughts or the science on the issue. Just herd them all along like compliant sheep. Or punish them for resisting groupthink. Masks and vaccinations are without question the only ways to go, Abdul-Jabbar said. That’s open-mindedness for you, SJW style.

That’s also a wrap, says Martinez. Take all this vaccination wisdom from a reputable source – a six-time NBA champ and six-time MVP.