Jab Or Else: NBA Referees Stuck With Vaccine Mandate 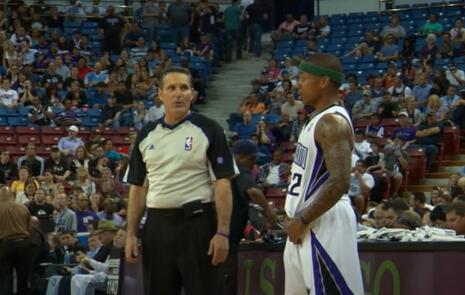 The National Basketball Association announced over the weekend a new vaccine mandate for its referees, coaches and others who work with players. With few exceptions allowed, these people must get the jab and recommended boosters. However, players and fans are not facing a vaccine ultimatum. How unfair is that for those under the mandate?

Referees – as well as trainers and coaches -- appear to be the NBA’s low-hanging fruit. The league may be too cowardly to try to force LeBron “King” James and other high-profile players to take the jab. The National Basketball Referees Association sold out its constituency on the vaccination mandate. What will happen with referees who suffer adverse reactions to vaccines is anybody’s guess at this point.

"All referees must be fully vaccinated unless they have a religious or medical exemption. The referees have also agreed to take any recommended boosters," the NBA’s Saturday  statement read. "Any referee who does not get vaccinated and is not exempt will be ineligible to work games."

Let’s get this straight. The players’ right to earn a living is not contingent on a vax mandate. But the game officials’ careers will be put on hold if they abstain from vaccination. The NBA is an extremely unpopular league with its social justice nonsense and its abominable stance on communist China. Now its inconsistent treatment of employees is just another flammable addition to this dumpster fire.

Will any referees actually dare to stand up to the NBA powers in claiming a religious exemption?

Who’s going to referee the referees? Who’s going to trot out on the court with a measuring tape to enforce the new rules? And what happens when a vaccinated official, trainer or coach contracts COVID-19? That’ll spread some egg on the NBA’s face.

CNN reports that “Any staffer who isn't fully vaccinated will not have any interaction with players or referees and will be required to always wear a face mask at team facilities, the memo said. Unvaccinated staffers will also be prohibited from being on the bench during games, will not be allowed in the locker, weight, or training rooms, may not attend in-person meetings, and cannot travel with the team."

NBC’s Kurt Helin writes that this vaccine mandate “is a good thing. The science is clear: the COVID vaccine saves lives … ” Vaccines not yet approved by the FDA have also cost people their lives. Vaccinated people have also contracted COVID-19. That’s the not-so-good part.

Here’s one more aha moment about the NBA’s inconsistency. While the Milwaukee Bucks were making their 2021 run to the championship, thousands and thousands of fans were allowed to mingle outside their arena. And now the Wisconsin Department of Health Services has identified 491 persons who contracted COVID-19 there. The DHS also noted this is a conservative estimate, too.

All things considered, the NBA isn’t the most reputable organization for lowering the spread of COVID-19. Or for ensuring the personal freedom of its employees.