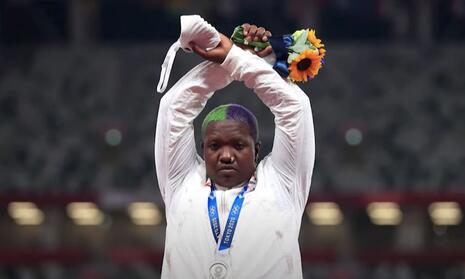 Radical left media like Deadspin implored the IOC to leave Saunders alone instead of punishing her. As of this morning, the organization that runs the Olympics had not taken any kind of action against her. It was looking into the highest level of protest yet seen in the Tokyo Games. Whether the protest will stand unchallenged, and whether the IOC is just a cowardly organization that doesn’t enforce its own rules, remains to be seen.

A 25-year-old, black lesbian who wore a Hulk mask during Friday’s qualifying round, Saunders said of her protest, “It’s the intersection of where all people who are oppressed meet.”

Actually, a victory podium at the Olympic Games is where Gold, Silver and Bronze medalists receive their honors and pay homage to the winning athlete’s national anthem. There were no sightings of enslaved people at Sunday’s track and field award ceremonies. Olympic victory stands are not the place to air grievances or to turn sporting events into social justice protest downers.

Deadspin loved what Saunders did, stating:

“The IOC needs to have some common sense on this one and let Saunders be. What she did wasn’t disruptive and her message needed to be delivered to the world.

“Shoutout to Saunders for speaking up and being a representative for the oppressed."

“I’m a black female, I’m queer and I talk about mental health awareness — I deal with depression, anxiety and PTSD, a lot — so for me personally, I represent being at that intersection. I decided to use my platform to speak up for all those people, for anyone who represents any part of or any one of those groups, especially, this medals is for [them].”

Saunders also tweeted a message to detractors: “Let them try and take this medal. I’m running across the border even though I can’t swim."

So the Olympics have come down an opportunity to speak up for the oppressed. Like the politically powerful LGBT juggernaut doesn’t have much of a voice? Come on, get real! And whose platform is it anyway? It belongs to the Olympics, not agenda-driven social justice warriors.

Not surprising, the U.S. Olympic and Paralympic Committee defended Saunders’ controversial behavior, calling it “respectful of her competitors” and saying it did not violate our rules related to demonstration.” This committee had freely allowed protest at U.S. Olympic trials competitions.

The IOC’s Kristy Coventry, who heads up the Athlete’s Commission, previously stated that “our recommendation is to preserve the podium, field of play and official ceremonies from any kind of protest or demonstrations or acts perceived as such.”

Hopefully the IOC will take clear actions to preserve the podium.  Seventy percent of athletes previously polled by the IOC objected to.