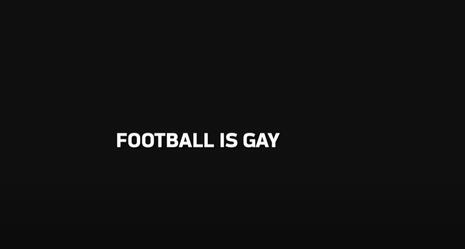 At long last, football has shed its macho identity of steel curtains and doomsday defenses, not to mention toxic masculinity. Football came prancing out of the closet Monday with a new identity: “gay,” “lesbian,” transgender” and “queer.” As well as "beautiful."

The NFL’s marketing department has demonstrated the fine art of virtue signaling on performance-enhancing drugs with this startling Youtube video.:

The video follows’ last week’s revelation that Las Vegas’s Carl Nassib is the first active NFL player to emerge from the closet. It also gives the NFL a big virtue-signaling send-off to the LGBT’s annual June pride month.

“The move marks a continued progressive swing by the NFL, which has been criticized for not doing enough to be inclusive,” says The Daily Beast’s Lawrence Ukenye.

The NFL wrote this love note alongside the video in its Twitter posting: "If you love this game, you are welcome here. Football is for all. Football is for everyone." Especially if you’re a lesbian linebacker.

None of this nonsense is surprising when considered in light of the NFL’s actions last October. It was then that Troy Vincent, NFL’s executive vice president, announced a league-wide blitz for LGBT interests. The league debuted a new pride-themed website promoting joint projects with GLAAD and the Trevor Project. NFL Films, which previously created documentaries like the “Headcracker Suite," devoted its resources to a "National Gay Flag Football League" program.

In an interesting side note to the NFL’s October flurry of LGBT pride, the league blocked a NewsBusters post of its own video on the National Coming Out Day. “This video content from the NFL, who has blocked it from display on this website or application. Watch on Youtube,” the message read.

This ain’t your father’s NFL anymore, not by a long shot. It’s not the league of Dick Butkus, Mike Ditka or Pittsburgh’s famed Steel Curtain. The NFL had already turned off many fans, on both sides of the political aisle. The latest bull-rush of pride mania may just be the last straw for another wave of fans who’ve had enough of the social justice, virtue signaling and political grandstanding.