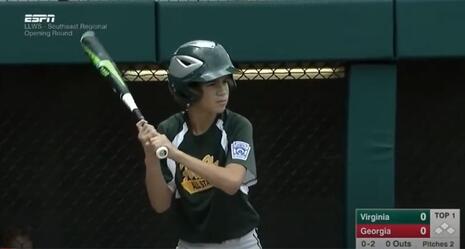 Students in Alexandria, Virginia are getting doused in critical race theory by public schools and the local Little League baseball organization. It’s virtue signaling on steroids.

Little League board president Sherry Reilly emailed all coaches and board members ordering the cancellation of practices on May 24 so they can attend a “Sports Can Battle Racism” workshop. Young baseball players will in turn be fielding critical race theory from their coaches in place of ground balls. The workshop is not optional.

The Alexandria Little League organization (which made the 2017 Little League World Series, seen in the file photo above) is partnering with the Positive Coaching Alliance (PCA) to confuse children and adults about U.S. race relations and more. Casey Miller, a spokeswoman for PCA, fed the Washington Free Beacon the following nonsense:

We want kids to have a positive youth character building experience, and resources and training that empower youth coaches and parents. How we define culture is based on how we dive into the ‘we' piece about that statement. What does it mean to be a part of the we? Each person, no matter what background or what they look like, should feel a part of the we.

Core themes for the critical race theory workshop include: “Create a Caring Climate", "Model Anti-Racist Behavior" and others. Coaches are trained to perceive their own "internalized racism" and to become "institutional racism" cops in the community. They are also directed to take advantage of "anti-racism learning opportunities."

PCA started the Sports Can Battle Racism training last June after the death of George Floyd. The alliance's online resource library for "overcoming racism in sports" emulates critical theory-based training in nearby Virginia public schools, too.

A gender identity guide promotes more than 70 gender options. The PCA website lists five points for transgender allies to remember and a section on how to improve the lives of LGBT athletes. Gender "transcend[s] biology," the guide erroneously claims, and is "very complex since people can identify in diverse ways."

Parents in Alexandria are justifiably upset. One dad called PCA a bunch of virtue signaling busybodies.