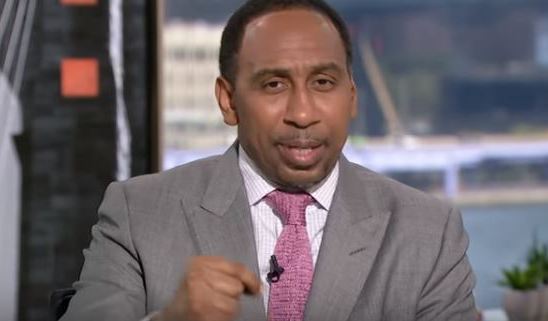 ESPN First Take yell man Stephen A. Smith (right) is under fire for making a mockery of journalism ethics. On Friday, The Root writer Stephen A. Crockett Jr. joined in with Jemele Hill's Twitter criticisms of Smith for secretly working with Jay-Z to arrange last month's failed NFL workout for Colin Kaepernick. Crockett and Hill, a writer for The Atlantic, are giving Smith no mercy.

In addition to straying -- as a journalist! -- into the matter of Kaepernick's potential employment with the NFL, Smith also angered Hill and others who believed the league's planned November workout of the former quarterback was a sham and he should not have been colluding with the league. Let's just say Smitty is up against it from all sides!

It's no wonder that Smith warned Kaepernick ahead of that workout to "show the hell up," since he helped organize it. And it's not surprising that when Kaepernick stiffed the NFL representatives in Atlanta and moved the workout location at the last moment, Smith's hair started on fire. Smith had supported the man for three years, but after this stunt he posted a video on Twitter accusing Kaepernick of wanting to be a "martyr" and not wanting to play again.

NFL Hall of Famer Terrell Owens and others accused Smith of abandoning cultural allegiance by turning his back on Kaepernick.

Crockett similarly wrote that Smith's "black credentials were thoroughly examined after what many believed was a bashing of quarterback-turned-freedom-fighter Colin Kaepernick’s clusterfuck on an NFL tryout. Smith was called everything but a child of God for his trashing Kap for pulling out of what we now know was a sham of a workout geared toward getting Kaepernick to sign away his rights to ever sue the league." And this: "Maybe Stephen A. is on a 'comeback to the blacks' tour but in a recent interview, the ESPN host claimed he was working behind the scenes with Jay-Z’s Roc Nation to get Kaepernick a tryout."

The thought of any Kaepernick backer working with the league that's supposedly "whiteballing" him is considered treasonous by left-stream media. Crockett said Smith's ego and hairline suffered a 2-inch setback after Hill snatched his wig on Twitter.

Hill aired out Smith "for being messy and double-dipping and recklessly driving all over the journalistic ethics highway. Arguably ESPN’s most prominent talent admitting to help orchestrate a workout for Colin Kaepernick … yeah let me go back to minding my business. Guards!” Hill tweeted.

"Let me read between the lines on this tweet a bit," Crockett added. "What Hill seems to be saying is, 'Nigga, is you tripping? Your job is to check coats is to cover and commentate on the news, not work behind the scenes to secretly orchestrate a job interview for a whiteballed player.' ” 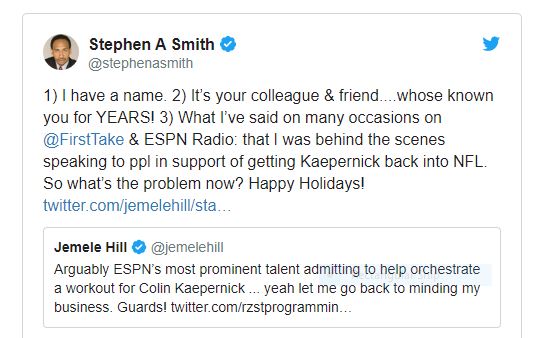 Crockett further accused Smith of being in the “stick to sports” camp two years ago instead of defending Hill when she tweeted that President Trump and his supporters are "white supremacists." Crockett asked "how a commentator of sports can work to help a quarterback get back into the league on any level. It’s one thing to champion a player, but it’s a whole ’nother to work to get him a tryout."

Colluding with the so-called evil, racist NFL owners just shows Crockett how far Smith is in with the league.

Hill also indicated she wants to take Smith to the woodshed in a phone conversation. Crockett referred to this as "the subtle art of black women who are about to hand you your ass," and expected Smith to be at a loss for words.