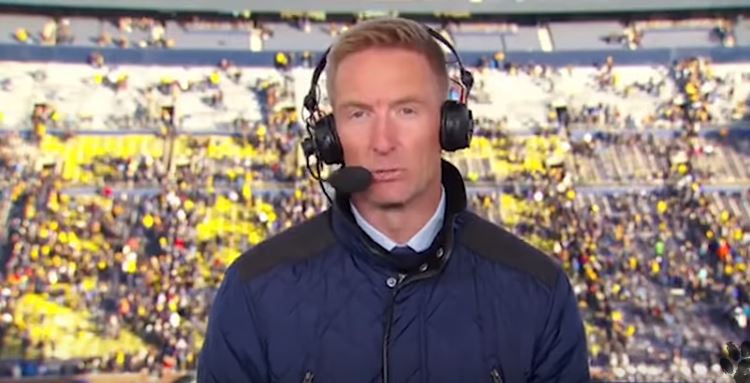 Awful Announcing's Ben Koo posted a lengthy report on Fox Sports emerging as a major threat to ESPN's long monopoly on college football coverage. Declaring a key part of that rivalry as political, Koo likened ESPN to a "punching bag" and Fox Sports as the alternative of choice for "disgruntled conservatives."

Koo wrote that Fox Sports is capitalizing on divisiveness and tribalism. ESPN is facing major complaints that it's biased in favor of the SEC and it has a "left-leaning political bias."

"The legitimacy of either gripe is up for debate, and of late ESPN has done well to defuse the political bias claim (although it lingers in certain parts of the internet) like a bad fart in a phone booth," Koo alleges.

Truth be known, ESPN President Jimmy Pitaro insists that ESPN not be political, and political bomb throwers like Jemele Hill and Michael Smith are long gone. However, Max Kellerman, Stephen A. Smith, Dan Le Batard, Michael Wilbon and most panelists on Around The Horn still make ESPN a leftist bridge too far for some conservatives to cross.

There is an undeniable reality, too, Koo said, that is similar to the 2016 election when a large swath of the Midwest surprisingly flipped away from ESPN viewing, "opting to go in an untested new direction instead of the status quo. ... Fox Sports has emerged as a worthy threat to what was once almost an ESPN college football monopoly."

The surge toward Fox Sports (see above photo of Fox Sports football analyst Joel Klatt) also extends beyond college football ― to include coverage of political, cultural and social news:

"On the politics front, it’s not hard for Fox to stand out as a better alternative to ESPN to disgruntled conservatives, given that the Fox brand is already synonymous to conservatives thanks to Fox News. Fox News has been ramping up their sports coverage by covering divisive sports stories like White House visits or lack thereof by championship teams, Colin Kaepernick, the NBA’s bungled response to Daryl Morey’s Hong Kong tweets, and even Don Cherry’s firing."

Koo conceded that college football fans skew more conservative than other sports, and "ESPN’s rise as a punching bag for conservatives certainly opened the door for Fox to make inroads with fans looking to boycott ESPN."

Fox Sports also hit pay dirt as a "clear alternative" to the perceived preferential treatment the SEC gets with ESPN. Koo said, "This is essentially the hypothesis that Fox News was built on; that other network that pisses you off is for them, but THIS network doesn’t have the same beliefs. We do things differently here."

Also, Fox Sports is small enough that it can escape the attention that the gigantic ESPN faces. On Fox Sports, there is less studio content compared to what ESPN does, and that means fewer analysts, less analysis, debate and commentary that could be perceived as biased, Koo said, who detects bias on Fox News and Sports.