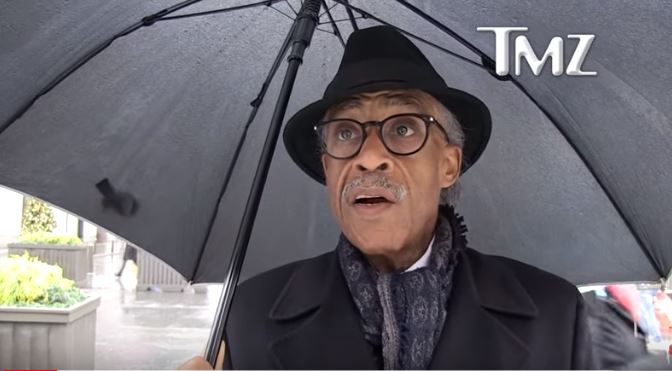 A couple days after Gladys Knight said she's returning home to Atlanta to sing the national anthem in the Feb. 3rd Super Bowl, Rev. Al Sharpton, of MSNBC, tells TMZ Sports an African-American entertainer is failing to fight Jim Crow at the Super Bowl. The halftime program, now a regular blight on the culture, has become a big political football with supporters of Colin Kaepernick boycotting in protest to his unemployment.

Entertainers Rihanna, Cardi B and JAY-Z turned down opportunities to appear on the Super Bowl's big stage because they're upset that Kaepernick isn't playing in the NFL. Rapper Travis Scott agreed to perform, and not without pressure from Kaepernick and JAY-Z to join the boycott. Kaepernick's girlfriend, Nessa Diab, and other apologists have blasted Scott on social media as a sellout.

Rev. Sharpton (appearing in photo above) went well beyond calling Scott a sellout. When TMZ's video cam caught up with the race-baiter on the street and asked him about the controversy swirling over Super Bowl 53's halftime show, he brought Jim Crow into the controversy:

"I think anyone that goes into the halftime show is in effect directly violating those that want to raise the question that the NFL should come to terms with what they have done and continue to do to Colin Kaepernick and those that protest on criminal justice issues.

"You can't tell people to stand for those that take a knee and don't go to the games and then say 'but somebody oughta perform there and entertain. You're drawing TV viewers, you're bringing supporters, and I think that you can't have it both ways. You can't help people market something and then turn around and say you agree with the people protesting.

"I think he (Scott) should do what a lot of other major artists have done: say 'I'm not going to participate.' You can't fight against Jim Crow and then go sit in the back of the bus."

This latest halftime entertainment controversy only adds to what has become the NFL's contribution to cultural blight, as performers project race and vulgarity at their audiences. The league keeps making self-inflicted wounds with poor decisions over Super Bowl entertainment, then — sometimes — reacting only after the damage is done.

There was Janet Jackson's "wardrobe malfunction" in 2004. The NFL tried to clean up its act after that, but things eventually went downhill again.

Mathangi Arulpragasam, aka M.I.A., gave the finger to the audience while appearing with Madonna in the 2012 Super Bowl halftime sham. The NFL issued the statement: "The obscene gesture in the performance was completely inappropriate, very disappointing, and we apologize to our fans." The league also sought some $16 million in damages, and eventually reached a settlement with the Sri Lankan for her inappropriate actions. Hey, NFL, do the right thing and you won't have to seek damages that really do nothing to repair your sullied reputation.

In 2016, Beyoncè performed to a Black Panther theme for Super Bowl 50. She showed solidarity with the Black Lives Matter movement and wore a string of bullets across her chest to protest the killing of black men by police officers.

Last year, the Philadelphia Eagles ran onto the field for the start of the Super Bowl to the sound of rapper Meek Mill's "Dreams and Nightmares." This abomination includes more than two dozen n-words and mentions hoes, bitches, oral sex and F-bombs.

Is this ongoing pattern of grotesque and vulgar entertainment really what the NFL thinks America wants? The league stupidly thinks it can keep playing with fire and not get burned.