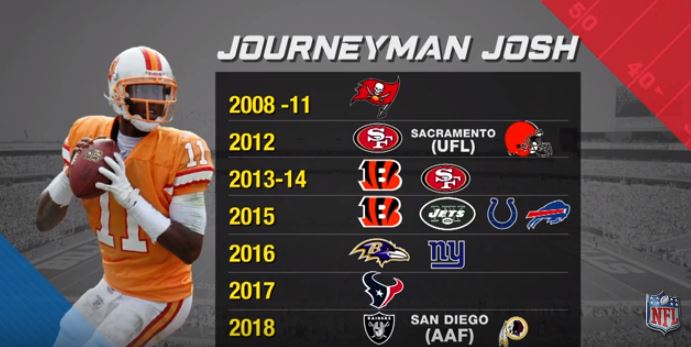 Healthy quarterbacks in the nation's capital are dropping like flies, and Washington Redskins head coach Jay Gruden told reporters Monday the team actually discussed Colin Kaepernick. But after the team passed (again) on the renegade free agent and signed "Journeyman" Josh Johnson (see photo), ESPN First Take panelists discussed why the radical kneeler missed out on another potential job in the NFL. Damien Woody and Max Kellerman started off with surface-level Kaepernick blather, but Stephen A. Smith soon raised the stakes.

Woody and Kellerman didn't believe Gruden's sincerity but still trotted out that tired argument that Kaepernick is supposedly so much better than many of the NFL's current quarterbacks, and he deserved a chance to play for Washington. But Smith introduced a whole new aspect to the Kaepernick debate when he suggested Kaepernick is a threat to gambling revenue.

Smith spoke of the U.S. Supreme Court's decision earlier this year "permitting the states to take hold of sports gambling issues ... . Why is that important?" Because the owners don't want anybody—like the "radioactive" Kaepernick—killing that potential golden goose by alienating Congress. Smith asked:

"What are the owners concerned about? Money. Why does Colin Kaepernick matter with that? Because now that you can get a piece of the pie in sports gambling, if Congress supports federal bills to initiate that, what's the one thing that could alienate, particularly Republican officials, from supporting a federal bill that will ultimately facilitate owners and teams getting a piece of the sports gambling pie? That's President Trump going out there and running his mouth and spewing the issue about patriotism, hijacking the issue of Colin Kaepernick and protesting the way that he did. So the owners are aware of this, and as a result, according to what I've been told, that's what's really going on here."

If this is all true, Smith says, then the Redskins' signing of Johnson, not Kaepernick, makes more sense. If Kaepernick returns to the NFL and resumes his disrespectful protests, it could revitalize the NFL's public relations nightmare and cost the owners money. Smith went on: "It would ultimately exacerbate a situation involving elected officials who would speak out against him in favor of patriotism, and as a result, that's what's keeping all of this stuff from happening ... . It's about a bigger picture, from what I have been told."

Kellerman accused the team of violating the U.S. Constitution by essentially saying that players must publicly parrot the club's political speech by standing for the national anthem.

Woody insisted it's more of a football problem that rests with the Redskins, and by not signing Kaepernick they've waved the white flag and given up on the season. "The message that it sends to the guys in the locker room is that we're not serious about winning. Because you have a guy in Colin Kaepernick right now that's a guy who's in his prime, who's been to the Super Bowl, and you don't even bring him in to try to help your football team? Imagine what the guys in the locker room are saying right now. ... "

Smith surprised viewers a second time when he raised a point about Kaepernick that most sports media reject. He said, "But let's not forget the 1-10 record that he had his last year and how he wasn't blowing everybody's socks off over the last couple of years as a quarterback. ..." Most media avoid that statistic like the plague and instead brag about Kaepernick's passing completion percentage in 2016, the last year he played.