President Joe Biden is once again putting his religious hypocrisy in the limelight. 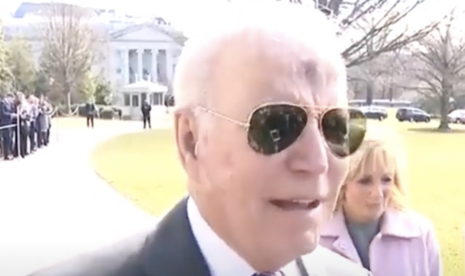 The 46th president, who has been called a “Devout Catholic” by the mainstream media, recently denied his ability to denounce abortion even though the Catholic faith dictates that all Catholics stand in opposition against the grave evil that is the killing of an unborn baby.

Biden told a reporter he has no right to tell other people not to get an abortion – an abdication of his faith – though at the time he had ashes on his forehead signifying he had been to church on Ash Wednesday, the first day of Lent.

Essentially, here you have a president who can’t even stand up for one of the major moral teachings of his faith, yet he’s walking around with ashes on his forehead acting as if he’s embracing the Catholic community and its devout and serious Lenten practices.

At best Joe is just a poorly-informed Catholic, and at worst he’s a hypocrite who picks and chooses which Church issues he wants to follow – even though the faith requires submission to all – while virtue signaling his Catholic bona fides with his ashes.

As The Daily Wire reported on March 2, an unidentified reporter ambushed “Devout Catholic” Biden just outside of the White House with a question about how the president reconciles his support for abortion with his faith.

“Why do you support abortion as a Catholic?” the reporter asked.

The sunglasses-wearing Biden began by dodging the question.

“I tell you what," Biden said, "I don’t want to get into a debate with you on theology.”

Though there’s not much to debate. The Church’s language on abortion is clear.

“Since the first century the Church has affirmed the moral evil of every procured abortion," the Catechism of the Catholic Church states. "This teaching has not changed and remains unchangeable.”

Biden has either never come across that passage or just doesn’t want to accept it. As First Lady Jill Biden came up to nudge the president away from the journalists and their tough “theological” questions, Sleepy Joe muttered, “I’m no– I’m not gonna ma–  I’m not gonna make a judgment for other people.”

REPORTER: "As a Catholic, why do you support abortion?"

BIDEN: "I don't want to get in a debate with you on theology, but you know...I'm not going to make a judgement for other people."

REPORTER: "But you're Catholic!" pic.twitter.com/KR7njW1cW9

Yep, total abdication of his moral responsibility. Yet this befuddled, doddering old man sure makes moral pronouncements all the time on other things, like saying that Republicans passing voter ID laws is like “Jim Crow.” That sure is a huge condemnation, which no sane person agrees with, but still he made it.

Biden’s own Church has told him abortion is wrong and encourages him and the rest of the faithful to admonish the sinner. At the very least, Biden could say he doesn’t agree with abortion. But no, he would never want to anger the left-wing base which thirsts for easy access to abortion.

And if Biden is serious about sporting ashes, which is a sign of embracing the penitential season of Lent, he would be on his knees groveling for his years of promoting the horrible and genocidal scourge of abortion in this country.