Sure, kids in public schools all over the nation are having to put up with wearing their face diapers, and teachers should be happy that they’ve gotten away with mandating such insanity. But what if a kid wears a mask some teachers don’t like, namely patriotic, pro-police ones? 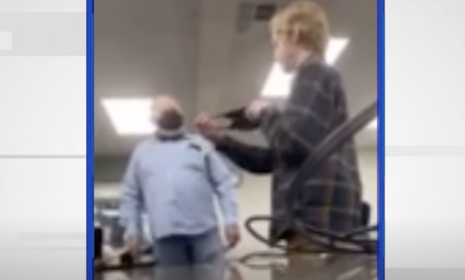 The Daily Wire reported on February 3 that a substitute teacher at Lyman Gilmore Middle School in Grass Valley, California yelled at a 13-year-old male student because he was wearing a thin blue line flag-themed mask in school.

The altercation between the substitute teacher and the student, named Lucas Lillar, was caught on camera by several students. The instructor made it clear that he was angered by the political nature of the mask’s design, calling it the flag of the “new Confederacy.”

Wow, what lunacy. Of course we all know the far left think’s pro-police merchandise might as well be covered in swastikas. Clearly this public school teacher has been imbibing some serious BLM propaganda.

During the footage of the confrontation, the teacher can be seen telling Lillar, whose dad is actually a police officer, “That’s not an American flag, that’s the new Confederacy flag.”  Geez,  hope this teacher hasn’t been filling in for history class.

He continued explaining that, although the thin blue line flag is an American flag with a blue and white police theme, it’s “not American.” Oh why? Because scumbag conservatives like it?

He loudly berated the kid, saying, “No, it’s black, white with some blue line in it.” The poor boy responded, saying, “Yeah thin blue line!” The teacher then rudely dismisses him again in front of the whole class: “Yeah but it’s not American.” A clearly exasperated Lillar insisted, “It’s American.”

A local CBS affiliate reported that wearing the mask is how Lillar shows support for his dad and other brave men and women in law enforcement. When asked by the reporter about how he feels about being vilified for the mask, he said he feels “worried.”

“I worry if like they’re gonna come on some person and they have a weapon in their car, and it just makes me feel worried.” Poor kid, there’s quite obviously a toxic atmosphere in this school for outspoken pro-American, pro-police children.

A substitute teacher was caught on video yelling at a 13 yr old student over his thin blue line mask saying “that’s the new confederacy flag” pic.twitter.com/M4Polx6AXI

In the CBS video, Lillar’s mom provided a short statement. She stated that she had her “mind-blown” by this treatment of her son. She also said it made her “angry” and heartbroken.”

Of course, CBS’ very balanced reporters made sure to acknowledge that the sign has “come to signal opposition to the racial justice movement.” No, CBS, thin blue line flags had been popular for some time before the Marxist domestic terrorists of BLM made normal ordinary police officers their enemies. Get it right.