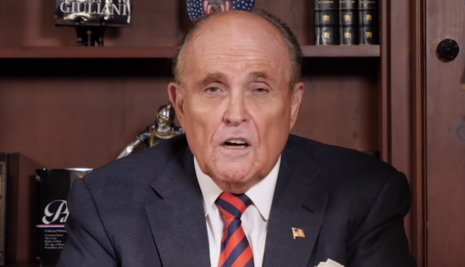 According to the Huffington Post, two of the four celebrity judges on the singing competition were so perturbed when finding out that Giuliani was on their show that they walked out over taping. The other two judges gave the former NYC mayor some lip about supporting Former President Trump while he was onstage.

The episode of the popular Fox show airs next month, so we aren't privy to the details of what costume Giuliani was hiding under for his musical performance before his big reveal. It was reported however that Giuliani’s cameo triggered the show’s panelists.

The premise of the show involves celebrities wearing ornate and whacky identity-concealing costumes while singing one at a time in front of several famous judges. The judges, along with the audience vote for which singer they like best and try to guess who each celebrity is under the mask. The show then reveals each contestant’s true identity in a shocking, made-for-tv moment.

Clearly Giuliani’s reveal was intended by Fox show runners to be a dramatic, jaw-dropping reveal that would reduce half the national audience to laughter and the other half to quaking rage. I mean, c’mon, this is the guy that was the face of Trump’s election challenge, a campaign that much of the country deplores with a passion.

Man, politics aside, that’s good reality TV drama. And Rudy is no stranger to dressing up for a laugh.

And don’t leave it to the audience to lose their cool. The two male judges of the show, sitcom star Ken Jeong and “Blurred Lines” singer Robin Thicke had to leave the stage during the taping because they were so disgusted at Giuliani’s reveal.

Deadline.com reported that “as soon as they saw Giuliani, judges Ken Jeong and Robin Thicke quickly left the stage in protest.”

Funny enough only the lady judges stuck around to talk to Giuliani after he dropped the mask, proving that the men were the most sensitive ones in the room. The piece stated, “fellow judges Jenny McCarthy and Nicole Scherzinger remained onstage” and “bantered” with the controversial political figure.

Unfortunately we all have to wait until the episode airs on Fox to see what they all discussed.

This isn’t the first time a controversial conservative political figure has had a big reveal on The Masked Singer. In 2020, former Alaskan Governor Sarah Palin was of the show’s contestants which caused an uproar among liberal fans.

Well, we’re sure to get a meltdown after the Giuliani episode, especially if the judges are that squeamish about it.