A rap song titled “Let’s Go Brandon!” has become so popular that it is now trending at number one on Apple Music’s Hip Hop charts. 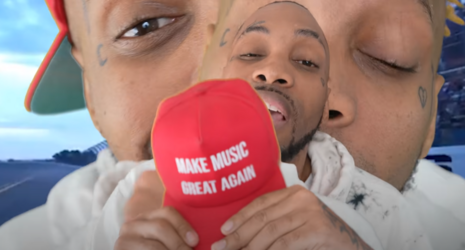 PopVortex.com’s record of what's trending on Apple Music shows that the song is currently in the number one slot on the streaming giant’s Hip Hop charts and it’s number two in iTunes “top 100 pop songs” chart, only behind Adele’s “Easy On Me.”

For those  who haven’t kept up with the many interesting and vital nuances of political humor these days, “Let’s Go Brandon” is not actually a song in support of people named Brandon everywhere, it’s actually a song in protest of President Joe Biden.

Yes. “Let’s Go Brandon” is actually a euphemism for the “F**k Joe Biden,” a phrase which has become a popular crowd chant at college sports games and concerts across the nation.

Thank a fake news journalist for changing it to the more family-friendly and acceptable Let’s Go Brandon. It happened a couple weeks ago during a NASCAR race, when NBCSN's Kelli Stavast told viewers that Talladega Superspeedway’s raucous (and obvious) chants of F*ck Joe Biden, were actually cheers of support for NASCAR Xfinity Series driver Brandon Brown.

So Biden protestors ran with it, making Let’s Go Brandon into a clever inside joke which everyone now knows means “F Joe Biden.”

Rapper Loza Alexander took this great euphemism and turned it into a rap song that went viral on social media platform TikTok. The song became so popular there that people started searching for it on Apple Music and now it’s the music streaming service’s number one Hip Hop song.

The song cleverly samples the “Let’s Go Brandon” phrase from the NBC sports reporter’s original audio and splices that together with crowds screaming “F*ck Joe Biden” in the background, echoing the main “LGB” refrain.

In the video for the song, Rapper Loza Alexander wears a red MAGA-style cap, with the words Make Music Great Again. His cheeky anti-Biden lyrics pack a serious political punch.

With that street hustle aplomb, Alexander raps, “And I say it with a passion, as I pull off in an Aston, don’t nobody like his ass, huh? Try to cover up and tell the people ‘Go Brandon.’”

Clearly, Alexander sees the fake news game here and continues to pummel it with his rap lines: “But we know what they sayin’ though. You can hear the chant in every post. Don’t nobody want this commie cause we’re not in China.”

Loza’s lyrics also take sweet revenge on the Trump haters, saying that they get what they deserve for five years of unfounded crying about that orange man. He raps, “Everybody hated Trump and now they out to catch a body.”

Yeah it’s pretty cathartic stuff, considering how the Biden administration has abused the country since he got into office. The fact that it’s Apple’s number two overall song means that many people are thinking “Let’s Go Brandon” right now.