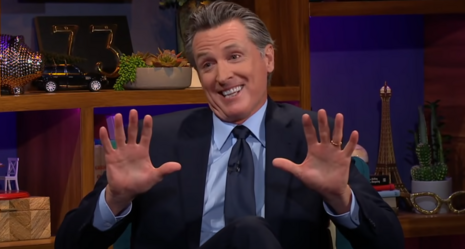 Hollywood is dead. The movies are derivative and most of the industry’s big name personalities have destroyed their popularity with their incessant leftwing politics. Though that doesn’t seem to stop them. In a mad dash to kill off whatever remaining dignity any of them had, several actors, producers and showbiz moguls are campaigning for Gavin Newsom (D-CA), one of the worst governors in American history.

These people can’t help themselves.

Gavin Newsom is so unpopular in California that he faces a recall election. But he's doing fine with the entertainment elites. People including singer/songwriter John Legend, Netflix CEO Reed Hastings and even entire film studios such as Paramount Pictures are shelling out major cash to keep anyone from replacing the failed governor.

FoxNews.com reported that “Executives, directors, producers and actors have opened their pocketbooks to protect Newsom, who faces a recall on Sept. 14.” The recall election features several candidates who could potentially replace Newsome if the majority of California voters don’t vote no to the recall on the ballot. Conservative talk radio host Larry Elder, who has a sizable lead in polling, could become the governor of one of the bluest states in the union. Though Newsom is still slightly favored to survive the recall, Elder as California governor is a terrifying prospect for the leftists in Hollywood.

Thus you have far left celebrity John Legend tweeting desperately for people to vote no in the recall. On August 23, the singer wrote, “Don’t DeSantis our California. Reject the ridiculous recall. Vote No and return your ballot by 9/14.” Oh no. Don’t “DeSantis” the state? Sounds like Mr. Legend is afraid of freedom from medical tyranny, something Governor Ron DeSantis (R-FL) has infamously fought against with his stances against mask and vaccine mandates.

In terms of donations, the outlet reported on a stunning one. Netflix CEO Ron Hastings donated a huge sum of $3 million to the PACs defending Newsom from being recalled. $3 million? Wow. Though Hastings is just reciprocating the special treatment his company got when Newsom allowed film and TV studios to work despite state lockdowns while everyone else was forced to close down their businesses.

Even better, Netflix had a lobbyist at the infamous “French Laundry” dinner from last year -- the one where an unmasked, and not socially-distanced Newsom ate with special interest groups during the height of the pandemic and cut them the lockdown loopholes.

In addition, “The Entertainment Software Association contributed $50,000, while Paramount Pictures gave $40,000 and the Motion Picture Association spent $10,000 on the effort” FoxNews.com reported. In a virtual fundraiser put on by consulting firm Gonring, Lin, Spahn, celebs including Rob and Michelle Reiner raised $1 million dollars to protect Newsom.

Also director Stephen Spielberg has given $25,000 to the anti-recall effort, as well as singer Barbra Streisand, who has given $2500.