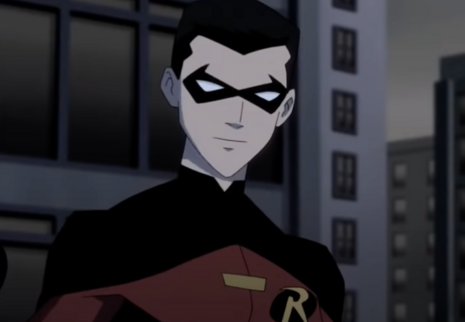 Holy shoehorned sexual deviancy, Batman! The Dark Knight’s greatest sidekick, the Boy Wonder himself, Robin has finally come out of the closet. What, really? Yep, in one of the latest Batman comics from DC, Robin is interested in men.

Oh, thank goodness for that.

According to nerd culture outlet Polygon, Tim Drake, AKA Robin, came out in the latest volume of DC’s new anthology series, Batman: Urban Legends. This unique series takes detours from Batman’s main story and focuses each volume on a specific character in the DC Batman universe. This latest volume apparently includes a story beat on the sex life of Bruce Wayne’s most trusted crime-fighting friend.

The outlet details how this comic, number six of the anthology series, deals with some sort of existential crisis Robin is up against. Apparently, wearing super tight pants, uttering his famous catchphrase and getting the adulation from every female citizen he and the big man save just doesn't feel the same anymore. We’ve all been there, right?

However, what spurs Robin towards finding himself again is the romantic attention of one of his good friends, Bernard. Apparently, Robin has to save Bernard from some supervillain and starts undergoing some strange, mysterious feelings. In the throes of rescuing Bernard, Robin has a “lightbulb moment” and realizes that he has romantic feelings for his old friend.

Oh, right. Nothing like figuring out you’re into guys to dispel that quarter life crisis. Towards the end of the comic, Tim Drake owns up to his feelings towards Bernard and decides to go ask the blonde boy next door on a date. Drake rings Bernard's doorbell and when he answers, Robin expresses his true feelings. “I’ve been doing a lot of thinking, about that night, and I – I don’t know what it meant to me. Not yet. But I’d like to find to out.”

Happily, Bernard replies, “I was hoping you would. Tim Drake … do you want to go on a date with me?” The comic book concludes with Robin saying, “Yeah ... yeah. I think I want that.” Cue the quick teaser in the comic’s final panel “TO BE CONTINUED IN BATMAN: URBAN LEGENDS #10.”

Writer Meghan Fitzmartin described the moment she found out DC would go ahead with the “meaningful” storyline, saying, “I fully sat on the floor of my apartment for a solid two minutes in happiness as it sunk in.”

As for what letter of the LGBTQ alphabet Drake identifies with now, “Fitzmartin says that Tim hasn’t put a label on himself yet,” according to Polygon.

"I wanted to pay tribute to the fact that sexuality is a journey," Fitzmartin told Polygon. “To be clear, his feelings for Stephanie have been/are 100% real, as are his feelings for Bernard. However, Tim is still figuring himself out. I don’t think he has the language for it all... yet."

Imagine how exciting the next installment concerning Robin’s sex life will be. Does the date go well? Does Robin get cold feet? Is Bernard actually the Joker hiding an evil plot behind an innocuous dinner date? Oh yeah, the suspense is just killing us.

Joking aside. It’s just the latest pop culture staple pandering to the ever-present, ever-complaining LGBTQ crowd. Maybe DC can stay relevant for a few more years, until the woke crowd demands that the Dark Knight himself becomes gay or some other sort of non-hetero sexuality.

Though, for real old school Batman fans, there’s no need to get too angry about Robin being gay, bi or pansexual. At least this new queer Robin is not the Robin introduced in the 1940s. That Robin was Dick Grayson. Nor was it the second Robin, Jason Todd. Tim Drake is the third Robin iteration who was introduced in 1989. There’s some consolation ... maybe?