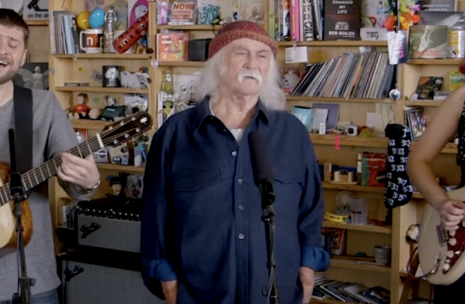 Musician and peace and love enthusiast David Crosby is currently moonlighting as a bloodthirsty fascist who thinks about shooting people who promote politics he doesn’t believe in. Yeah sure, the first member of Crosby, Stills, Nash and Young embodies that hippy lifestyle, though today it seems in a way less reminiscent of John Lennon and more akin to Charles Manson.

In a recent interview with The Daily Beast, the songwriter who inflicted “Almost Cut My Hair” on the world had some brutal words for the creator of Fox News, Rupert Murdoch, saying that he should be “taken out and shot” because of all the fake news being pushed out of his network. Oh he also went on about how evil Trump is.

Geez, Another has-been with a negative opinion of right-wingers? Ooooooh, Daily Beast., talk about exclusive scoop!

But yes, how’s that for partisan journalism? Begin your interview with the mustachioed musician talking about his music and then switch right into talking about Trump. Readers could see that Crosby knew that this was going into cheap political clickbait, when he responded to the Trump pivot, with a simple, exhausted, “Ah, jeez.”

Yeah we hear you, Croz. No one wants to do this.

But Daily Beast still managed to beat that dead horse, getting quite a mouthful out of the old folk-rocker. As far as his take on Trump, Crosby paraphrased all the fever-dream MSNBC Maddow hour talking points, like Trump’s some sort of Russian gangster who any day now will be nailed by New York City D.A.s. Crosby stated, “They know he’s been taking Russian mob money and laundering it into New York real estate for probably 30 years. They’ve watched him do it; they know where the money is coming from. So, the folks at the Southern District may nail him.”

Anyways Crosby, who’s such an anti-government hippie that he has refurbished the same political perspective of the Democrats in power and most mainstream pundits on cable television, called Trump “an evil bastard” who has “done an enormous amount of harm.” Oh yeah, shocker. Though the musician did say that the former president did one good thing despite being “evil,” and that is “he ripped the scab off of the racism in this country so that people have to look at it.”

Though the real whackadoo line came when Crosby tore into Fox News. Of course, it’s because the cable network is fomenting fake news and enabling people like Trump. “I know that there are a lot of really stupid people in the world and that many of them are in power and that the rest are being fed a whole shitload of absolutely untrue shit.”

David Crosby then added, “Rupert Murdoch should be taken out and shot.” Oh wow. So much for peace and love. He also stated, “people on Fox are doing great harm to the human race.” Yeah, will Crosby be gathering together the firing squad for FNC anchors?