Biological Dude First to Be Nominated For ‘Best Actress’ at Emmys

Ah, history is made yet again in our budding United States Socialist Republic. Hollywood has nominated its first ever biological male in a top Best Actress category. 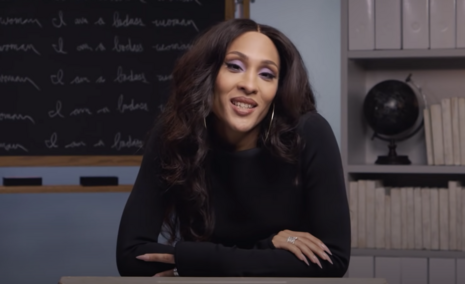 And, no, this wasn’t some third rate awards show, like the BAFTAs or BET Awards, or even the SAG Awards. ‘Twas the primetime Emmys that pushed this gender-destroying, reality-bending boundary. On Tuesday July 13, The Hollywood Reporter wrote that actor Mj Rodriguez became the “first transgender performer to be nominated for a lead acting role in a primetime series” for the 73rd annual Emmy Awards.

Rodriguez was nominated for the “Best Lead Actress in a Drama” Emmy category. The awards ceremony is set to be held in September.

Rodriguez – a biological male – starred in the latest and final season of FX’s LGBTQ centric series Pose, a show which featured “the largest cast of transgender actors in series regular roles, including Mj Rodriguez, Dominique Jackson, Indya Moore and Hailie Sahar.” The series, which is based upon the New York City underground drag scene of the 1980s, wrapped up in June. And of course, no self-respecting Hollywood awards show could allow Pose to go off into that cold dark night without a culture war controversy.

So, yes, now we have our first ever situation where a man could potentially beat out several beautiful and talented biological ladies for the world’s top TV acting award. Let’s see Meryl Streep get up and applaud that as the latest industry achievement for female representation.

Though Rodriguez is the first trans person to get a nomination for a lead acting Emmy, other trans people have received Emmy nods in the past. Orange Is The New Black “actress” Laverne Cox – a biological man – received four nominations for “Best Supporting Actress in a Drama” for her role in the lesbian prison show.

Upon hearing the news, Rodriguez beamed. “I felt represented and I felt seen," he claimed, adding that he also felt “more accepted than I have felt in a long time.” Though, again, how about biological female actresses Uzo Aduba, Olivia Colman, Emma Corrin, Elisabeth Moss and Jurnee Smollett, who were all nominated in the same category as Rodriguez? If they lose to a guy, will they all feel as “seen?”

And to think, Elizabeth Moss is nominated for her role in The Handmaid’s Tale, an adaptation of Margaret Atwood’s dystopian novels, which depict women as having no special intrinsic dignity in the eyes of the government.

Hollywood gay lobby, GLAAD, congratulated Rodriguez on the nomination and applauded the political victory achieved by such industry recognition. It stated, “Mj Rodriguez's Emmy nomination for outstanding lead actress in a drama series is a breakthrough for transgender women in Hollywood.” Yeah, it’s one small step for trans kind, and one giant, disastrous leap backwards for literally everyone else.