The Hollywood COVID cult just continues to reach new heights in its insanity. The latest debacle  involves actress Bette Midler threatening the lives of kids with peanut allergies with a jar of peanut butter. 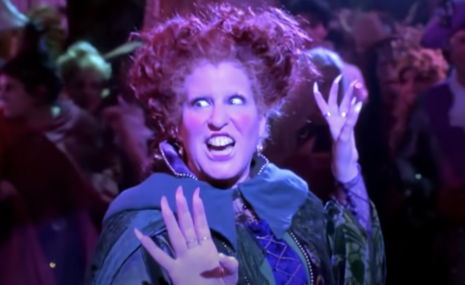 Mmmhmm. It’s every bit of stupid and insane you thought it could be.

The leftist, who was saner during her gig as a cackling witch in Hocus Pocus than in real life, found a creative way to explain how she would punish parents and their kids for refusing to get them vaccinated if she could.

On May 9, Midler tweeted out a quote, which stated (tweet also available below), “If my kid can’t bring peanut butter to school then yours can’t bring the deathly plague. Vaccinate or I’m bringing the Jiffy.”

So yeah, of course it’s a bit of dark humor, and we’re not going to overanalyze it. But it does kind of let us into the demented mind of one of Hollywood’s most vocal lefties.

For Midler, and others like her who have no problem being stranded in their ritzy Beverly Hills digs for a year – while millions lose livelihoods or miss valuable school time with their peers during the pandemic – risking contracting a virus with a low death rate is the same as taking a lethal object and knowingly feeding it to someone with the intent to hurt or kill them.

Yeah sounds sane, right? Definitely. And really, the fact that Midler resonates with such a twisted way of hurting innocent children, shows that she’s one sick puppy. But we knew. She’s constantly tweeting like she’s a mental ward patient, but because she’s "woke" everyone’s fine with it. That tweet’s still up.

After all, why can’t Twitter or the CDC reprimand her for spreading the disinformation that the risk of Chinese Virus spread is as deadly as giving a kid with peanut allergies the “Jiffy?” We don’t need to be scientists to know that the death rate of the latter is higher than .01%, (the COVID death rate for young people.)

But for these OCD liberal nuts, all’s fair in love and vaccination. One conservative Twitter personality slammed Midler with a sarcastic retweet. “Sunny McSunnyFace” tweeted:

Perhaps if Midler stepped out of her abode and saw that she won’t be struck dead instantaneously by the disease, she might ease up. At any rate, Hollywood sure needs a jumpstart post-pandemic because these people have too much time on their hands. Disney+ needs a Hocus Pocus sequel STAT so Midler can find some stability!