The entertainment industry did their best to try and make Donald Trump’s life a living hell while he was in office, but it seems as if the former president is getting the last laugh. 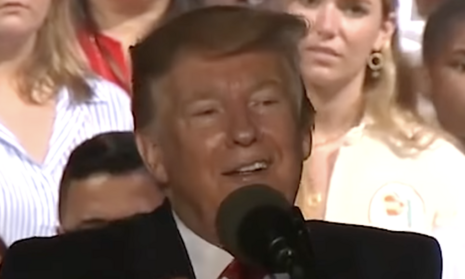 As the Trump administration ended, the president kept most of his huge base of support intact, while Hollywood proceeded to lose even more viewers than the few it still had. According to Nielsen ratings, the first post-Trump era Academy Awards was a ratings disaster. The telecast suffered the worst viewership in its history, losing half the viewers it had last year, and that was already the worst Oscars in history!

The former president weighed in on the historic showbiz debacle via an official statement from his office at Mar-a-Lago on April 27. “What used to be called The Academy Awards, and now is called the ‘Oscars’ —a far less important and elegant name—had the lowest Television Ratings in recorded history, even much lower than last year, which set another record low,” he wrote.

The Nielsen ratings, as reported by The Hollywood Reporter, indicated on April 25 that “the 93rd Academy Awards drew 9.85 million viewers and a 1.9 rating among adults 18-49 on Sunday.” This was a “58% drop” from last year's "23.64 million viewers and 5.3 in the key ad demographic — both of which were the previous all-time lows.”

Again, those are horrific numbers, especially coming from a group of people who still take the time to condescend to viewers that the Hollywood way is the most successful and righteous.

Trump blamed the award show’s ratings fail on it being "politically correct" and “boring.” He claimed, “Go back 15 years, look at the formula they then used, change the name back to THE ACADEMY AWARDS, don’t be so politically correct and boring, and do it right.” The former president then mentioned that the show should hire an official Oscars host, a staple the Academy did away with in 2019 after comedian Kevin Hart stepped down from the gig following backlash he received for his “homophobic tweets.”

Of course, Trump then dug back into the political nature of the Oscars and accused the broadcast of being a glitzy advertisement for the Democrat Party: “These television people spend all their time thinking about how to promote the Democrat Party, which is destroying our Country, and cancel Conservatives and Republicans,” he asserted.

He’s right. The latest Academy Awards broadcast went heavy on the far left propaganda, particularly promoting hatred against U.S. law enforcement, praise for the Black Panther Party and pushing diversity quotas in the industry. And who could forget how bad these awards shows were during the Trump administration? Certainly not the man himself, who was the brunt of much verbal abuse from Oscar acceptance speeches of the last five years.

The former president concluded by saying the Oscars commitment to wokeness “certainly hasn’t worked very well for The Academy!” Judging by the latest ratings, it seems like they’ve completely destroyed themselves.