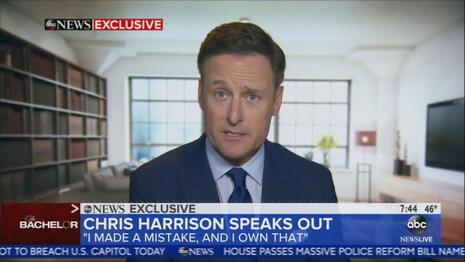 The left’s cultural inquisitors have made The Bachelor host Chris Harrison beg for mercy out of fear of being cancelled.

In an interview on Thursday's Good Morning America with co-host Michael Strahan, a contrite Harrison essentially recanted his resistance to “cancel culture” and groveled before his media overlords in an effort to smooth things over and get his job back after he had announced an indefinite break from the show.

To sum up Harrison’s crime, the Bachelor host had defended the reputation of one of his contestants who had been recently accused of racism. Contestant Rachel Kirkconnell had been hounded by critics after they found a college photo of her at an “antebellum-themed” party and discovered that she had “liked” an image of people posing with a Confederate flag.

The host’s big mistake involved him pleading for some mercy on behalf of the young lady in an interview with Extra’s Rachel Lindsay from February 9. Harrison said he felt Kirkconnell was being treated harshly: “We all need to have a little grace, a little understanding, a little compassion. I've seen some stuff online, again this 'judge jury executioner' thing where people are just tearing this girl's life apart and diving into her parents and her parents' voting record.”

Harrison added that he felt the public’s reaction to Kirkconnell’s past mistakes were “unbelievably alarming.” Though there would be no mercy for either Kirkconnell or Harrison. Critics slammed down the host’s defense of Kirkconnell and accused him of being “hella racist” and empathizing with people who “romanticize the confederacy.”

Of course, next came Harrison’s social media apology, where he defended himself as just seeking “grace” for Kirkconnell but then began his transformation into a weak-willed groveling, cancel culture prisoner, by admitting that his defense of the contestant “perpetuates racism.”

Apparently, the bellyaching that Harrison had begun prompted the people at ABC to drag him out onto GMA to show the whole world where he went wrong. During his interview from March 4, Harrison told host Michael Strahan, “I am an imperfect man, I made a mistake and I own that. He added, "I believe that mistake doesn't reflect who I am or what I stand for.”

Harrison then walked back his prior defense of Kirkconnell: “I am saddened and shocked at how insensitive I was in that interview with Rachel Lindsay. I can't believe I didn't speak against antebellum parties, what they stand for. I didn't say it then and I want to say it now: those parties are not OK, past, present, future.”

Come on. We knew what he meant. He was never endorsing those parties, but trying to turn down some of the heat on a naive young girl who made a mistake.

The most pathetic and emasculating part of Harrison’s interview came when he assured GMA audiences that he had been undergoing racial sensitivity training. “I sought out leading scholars, teachers, faith leaders, people like Dr. Michael Eric Dyson, who I am so grateful for, and I've also been working closely with a race educator and strategist. I thank them all,” Harrison stated.

What a tragic sight. The poor Bachelor host went and “deprogrammed” himself in front of millions of people. This is what our woke masters expect us to do if we want to be relevant in this society.

And even then, Strahan wasn't even satisfied with Harrison's efforts. The host stated after the interview, "His apology is his apology, but it felt like I got nothing more than a surface response on any of this." Harrison should have just stuck to his guns after defending Kirkconnell.