That’s Potato Head to You! Hasbro Drops the ‘Mister’ From Mister Potato Head 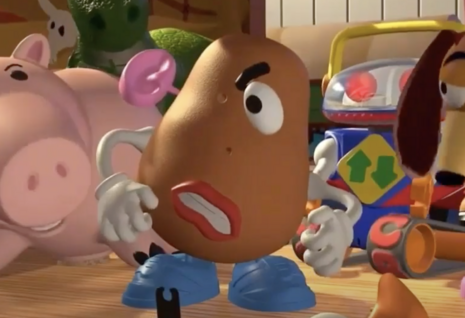 Well it’s about damn time Hasbro embraced the spirit of the age. Its famous toy and Toy Story star Mr. Potato Head is getting a gender neutral makeover. That’s right. It’s not mister, anymore. That’s Potato Head to you!

Hasbro, the massive toy company behind Barbie and other toys (that are soon to lose their genders if this becomes the norm), announced this very official and oh-so-serious corporate decision on February 25. The Associated Press related the news, reporting that the company “is giving the spud a gender neutral new name: Potato Head. The change will appear on boxes this year.”

Oh well isn’t that just so appropriate for our deranged and increasingly sterile society? The AP characterized the disturbing and unnecessary change as an update done in order to appeal to the perspective of current children. They wrote, “Many toymakers have been updating their classic brands in recent years, hoping to relate to kids today and to reflect more modern families.”

Of course, the implication there is horrifying. Kids young enough to enjoy Mr. Potato Head really shouldn’t not be having serious, obsessive questions about gender or sex. If anything this seems like insidious programming aimed at sensitive kids with far-left parents than a mere reflection of current toy users’ perspectives.

Still the editor-in-chief of toy review website The Toy Insider, Ali Mierzejewski, wrote, “It’s a potato. But kids like to see themselves in the toys they are playing with.” Ok so if we’re taking this as seriously as Ali is, then nonbinary Potato Head is designed to tell kids transgenderism is OK? Well that’s scary and irresponsible. The beloved toy will now be used to confuse young boys and girls.

Also, if kids have been reading into it that way – much more than it just being a toy with a funny moniker on the front of it – then perhaps our children for the last 30 years have been faced with the daunting prospect that sexually, they might be male potatoes.

Well then Hasbro made the right choice.

But back to being serious (because this is horrifying), Hasbro also announced a whole upcoming line of non-traditional Potato Head families. Gone are the days when Mr. and Mrs. Potato Head and their french fry children were the model nuclear family. Hasbro announced they will also “release a new Potato Head playset that will let kids create their own type of families, including two moms or two dads.”

Though Hasbro did clarify that they still will produce the Mr. Potato Head and Mrs. Potato Head characters, despite dropping the "Mr." from the official branding.

It seems the breakdown of the family in modern society won’t fail to be represented in every stupid bit of our culture. And what about Toy Story now? Will the fifth movie now do away with the stirring romance between Mr. & Mrs. Potato Head? What are we going to see next? A polyamorous, non-binary "throuple" of spuds helping Woody (who has since been changed into a gender-neutral Native American toy,) with his latest scheme? Next time we see him, will Andy have undergone a sex change which prompts all his toys to question their own gender realities? Knowing Disney, they’ll take that story idea.