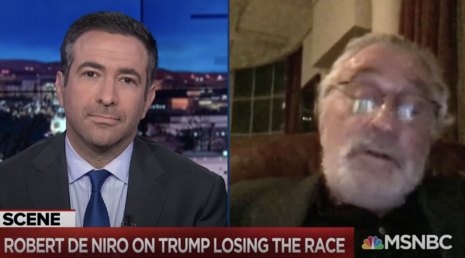 Well Robert De Niro can finally put away his middle fingers, for the moment at least, now that Donald Trump is the apparent loser in the 2020 presidential election. Still De Niro complained to MSNBC that he is worried about the arrival of a political leader even more capable of unleashing destruction than the current president.

Talking to MSNBC’s Ari Melber, the Godfather and Taxi Driver star expressed relief that the sole pain in his cushy Hollywood life, Donald Trump, is finally on his way out of office. The media’s in agreement so they’re going to have their field day.

Clearly, it’s been a stressful four years for De Niro. He’s been so angry with American leadership that he’s gotten onstage at the Tonys to say “Fuck Trump,” and he was mad enough that Republicans were refuting Dems’ fake impeachment attempts that he said “fuck ‘em” on Reliable Sources with Brian Stelter.

“I’m relieved, um, very, very relieved,” the 77 year-old actor told Melber on November 9. “As I keep saying, it’s like being in an abusive relationship.” Though, that’s interesting. Perhaps Trump tweets do really have a personal effect on De Niro’s Hollywood life. Who are we to presume?

Elaborating on the abusive relationship point, De Niro claimed, “We don’t know what’s going on, nobody knows. From one day to the next -- I don’t even think he knows what’s going on.” Apparently De Niro would like the country led according to the talking points of the Democrat party, because those are so transparent and never turn out to be lies.

“Thank God, that’s all,” De Niro declared, completing his first point. “We’re past that. We’re gonna have a lot of other problems -- that’s normal, you have them -- but when you don’t behave within certain parameters, certain rules, then there’s no point in having any -- what we have in this country.”

Um, what? Whatever. Though there’s no real code that Trump broke and the charges they impeached him over or launched a Russiagate conspiracy over were false. De Niro just doesn’t like Trump and that’s about it.

The Raging Bull leading man then wondered whether Trump “would leave” the office “gracefully,” to which the actor admitted he “doesn’t think he will.” De Niro said he believed that Trump would leave only after being forced to and then he’ll “save face” by accusing Dems of rigging it.

Despite the drama, De Niro maintained he was “very relieved” but said the one thing that does worry him is someone coming along that will be evil like Trump but more successful at it. “There will be other people like him in the future, maybe not in my lifetime, but … somebody’s gonna come along who is a lot smarter, more sensitive, more mercurial and not so boorish and will be able to pull the wool over the eyes of the public.”

“Then we will have deeper problems,” the actor concluded. Yeah maybe that candidate will be so much more evil that he’ll oversee the end of abortion, the completion of the border wall, and helm an even better economy. Ugh, it scares the heck out of us, that’s for sure.