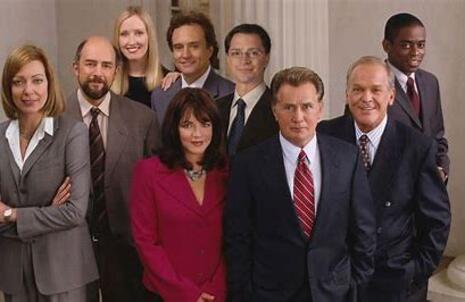 On October 15, famous TV drama The West Wing will air a reunion episode after years of being off-air, though this special won’t just be functioning as nostalgia-bait. Like everything Hollywood produces in the lead up to a major election, the West Wing reunion special will also double as a voter awareness program, with famous Hollywood lefties and a former president occupying commercial time to tell citizens to just VOTE DAMMIT!

TVLine reported on September 22 that the Bartlet Administration will be returning to the HBO Max streaming platform in October for an election-themed reunion, called “A West Wing Special to Benefit When We All Vote.” When We All Vote is a voter registration/education initiative co-chaired by former First Lady Michelle Obama, so you have her to thank for yet another melodramatic PSA on TV.

All your favorite West Wing characters will be returning, including Martin Sheen as President Bartlet himself and those played by “Rob Lowe, Dulé Hill, Allison Janney, Janel Moloney, Richard Schiff, Bradley Whitford.” Series creator Aaron Sorkin and executive producer/director Thomas Schlamme will also be returning to helm the event.

The reunion's format will be different from your ordinary TV episode. It will be a staged play version of an episode from season three of the classic political drama, called “Hartsfield’s Landing.” According to the outlet, that episode “first aired Feb. 27, 2002.”

An official synopsis of the episode says President “Bartlet (Martin Sheen) engages both Sam (Rob Lowe) and Toby (Richard Schiff) in intricate chess matches that mirror the wily game of brinksmanship that Bartlet is playing with the Chinese, who are conducting war games in the Taiwan Strait.”

The real vexing aspect of this stupid reunion special, besides you now trying to disassociate what may have been one of your favorite TV shows, from the pro-civil unrest, Trump Derangement Syndrome-suffering left, is that in between each of the episode’s acts, an annoying liberal will lecture you about voting.

“Michelle Obama, President Bill Clinton and Hamilton‘s Lin-Manuel Miranda” will be giving speeches on the dire need for people to vote in November, presumably with the tagline that life on earth will completely disintegrate from the twin forces of white supremacy and climate change that the Evil Orange Emperor will weaponize. Be sure to mark your calendar!