WHAT? Fox Streaming Platform Will Feature Farrakhan’s ‘Message’ from ‘God’ On July 4

As American society continues to convulse over the demands of politically-divisive, race-baiting groups like Black Lives Matter, one prominent TV network decided that showcasing a full speech from black supremacist and anti-semite Louis Farrakhan on the 4th of July would be a great idea. 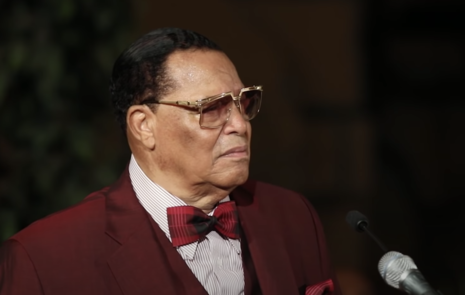 The man who is too extreme for the extreme lefties on Twitter gets to broadcast his thoughts on America for a massive streaming audience? What are these media executives smoking?

On Twitter, the streaming app’s announcement read, “LIVE ON FOX SOUL: THE CRITERION THE HONORABLE MINISTER LOUIS FARRAKHAN will deliver his MESSAGE TO AMERICA on JULY 4th at 11am ET / 8am PT.” The advertisement also linked to his religious group's website for those seeking more information on the minister’s speech or the generally insane tenets of the religious group. Though the tweet has since been deleted.

In a creepy tweet, Farrakhan’s own Twitter account characterized his upcoming address as “the message that God has formed in me. It is for every inhabitant of this planet. If it is the Will of God, I will deliver it to the world on July 4th.”

No self-respecting person would watch his speech for a couple obvious reasons, not that that creepy religious imagery wasn’t enough.

Again this is an insane PR move on the part of Fox Television Station, especially during a time of racially-motivated unrest in the country which has led to theft, violence, and even murder. Farrakhan has built a career by stoking racial tensions between multiple groups. He has made a career condemning white people’s collective treatment of African Americans.

An infamous video from decades ago (that recently-resurfaced due to Black Lives Matter-endorsing celebrities) encapsulates Farrakhan’s stance on race. In the clip, the radical minister educates a majority-white studio audience on how their desire for harmony between white and black folks is delusional.  “400 years” of whites oppressing blacks has practically nullified any chance of harmony between the two groups. He referred to this as “white guilt.” It almost mirrors current Black Lives Matter rhetoric. 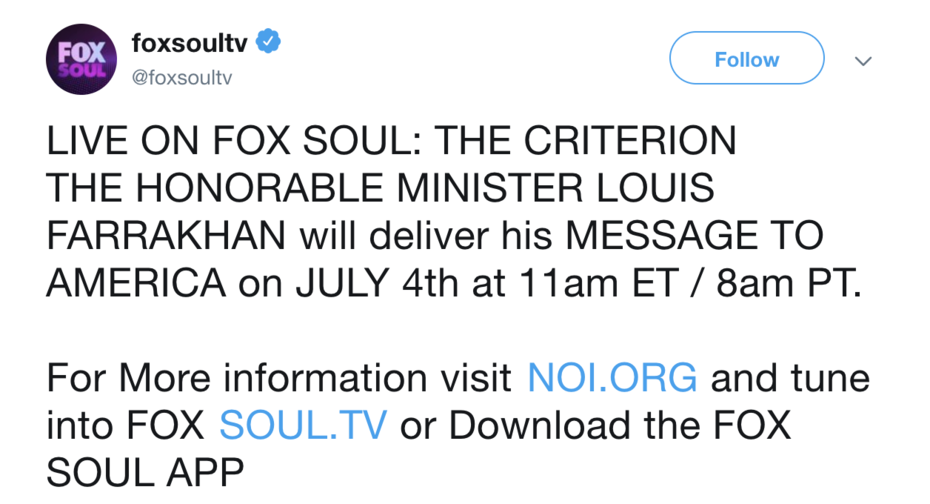 Farrakhan has gained notoriety for anti-Semitic comments in the past as well. He has made references to the “satanic Jew” in several addresses. In 2018, the minister tweeted, “I'm not an anti-Semite. I'm anti-Termite." A similar anti-semitic tweet prompted him being banned by Twitter in 2019, though his account has been reinstated since.

The fact that Farrakhan routinely promotes such a hateful message and is allowed to give a 4th of July address via a Fox Program is dangerous and abhorrent. CNN Anchor Jake Tapper tweeted, “Farrakhan is a vile anti-LGBTQ anti-Semitic misogynist. Why is a Fox channel airing his propaganda?” Now that is a question from Tapper we can get behind. Conservatives should ask that same question at FOX’s “Viewer Feedback Page” or on their Twitter page at @foxsoultv.