‘DEATH OF OUR DEMOCRACY’: Hollywood Tears Flow Over Murkowski Vote

Democracy’s dead. Yep, it finally happened -- well, according to Hollywood leftists who are shedding Olympic-size pools worth of tears, over their impeachment hopes drying up.

Sen. Lisa Murkowski provided the latest heavy blow to Democrats’ impeachment pipe dream on Friday, with her office telling the media that she will be voting “No” to hearing from new witnesses in what’s already been an exhausting and unnecessary process. This followed Sen. Lamar Alexander’s earlier decision to vote “No” and it was all way too much for Trump Derangement Syndrome sufferers in Hollywood.

Disgraced comedian Kathy Griffin could not contain her emotion at the idea that Trump’s probably not getting removed from office. She blasted Sen. Alexander and John Bolton for not condemning the president, tweeting, “So, history will reflect that Lamar Alexander and John f*ing Bolton as the two frail, old, pathetic men who took the United States from the great experiment of democracy to an authoritarian kleptocracy?” Whoa, it all happened so fast, huh? 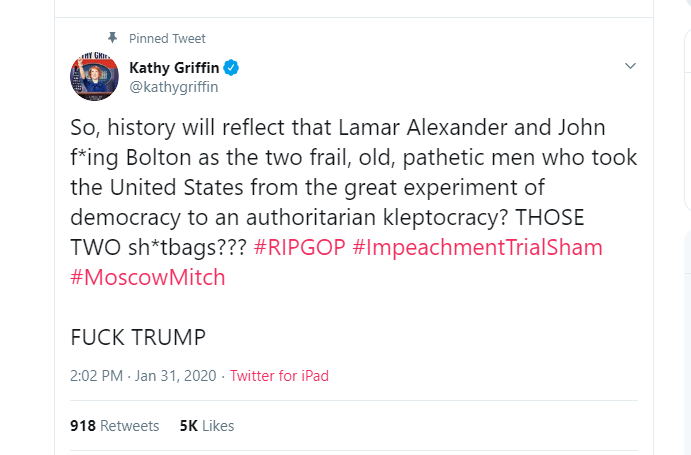 Rabid anti-Trump comedian Patton Oswalt lashed out as well on the social media platform, calling the GOP a sloppy “criminal cabal.” He tweeted, “Do the GOP Senators voting against witnesses and impeachment realize that more evidence will just keep spilling out? Like, probably later TODAY?” Yes, the desperate rush for more dirt on Trump is on in real time. It’s sure to get creative.

Trump-obsessed actor/director Rob Reiner asserted that America had just abandoned the “rule of law,” tweeting, “In a country that was still governed by the rule of law Cipollone would be disbarred and Donald Trump would removed from office and face criminal charges.” Here’s to five more years of Mr. Reiner shouting into the void about Trump’s criminality. Cheers.

ABC’s Modern Family executive producer Danny Zuker got really weird with it, creating a pledge for himself and fellow leftists to commit themselves to the Democrat Party in the wake of the news. He tweeted, “Repeat after me: I (state your name) will work my ass off to for the Democratic nominee even if that person is not my first choice because as any sane person can see the alternative is the death of our democracy.” What will it be after November 2020? A blood oath?

And finally, Trump-hating Star Trek alum George Takei tweeted about the Senate trial being a definite cover-up. He wrote, “The GOP-controlled Senate was as much on trial as Trump. And We the People find them guilty of a cover-up. In November, there will be a reckoning. Pass it on.” Oh you mean, you will vote to change our leadership in November? Hold up, guys. Takei says there’s still democracy. It’s safe to come out.