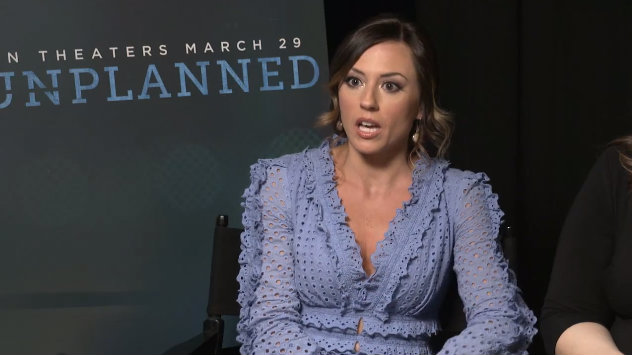 In an open letter, Bratcher blasted Milano’s recent Deadline op-ed criticizing a new Georgia bill that would require physicians to abandon the abortion option upon detecting the heartbeat of an unborn baby. Milano claimed it is “the most anti-woman bill of its kind in the country, and it sends the exact wrong message about the kind of state Georgia’s leaders wish to create.”

According to Bratcher, however, the bill is something to be “incredibly proud of,” because it shows that Americans are finally willing to take “a stand in the fight for life.”

Bratcher, a Georgia native, pointed out the hypocrisy on the part of lefty feminists railing on “in regards to women’s rights, more specifically women’s reproductive rights,” while “forgetting about the rights of women within the womb.” “Where are her rights?” Bratcher asked about an unborn baby girl while referencing the horrors of new late-term abortion laws, “like the ones in New York and Vermont being passed.”

Bratcher then discussed how her own brush with abortion shaped her, and how she has as much (or more) of a right to speak on the issue as Milano. She wrote, “Having just learned months ago that my life was spared on an abortion table, it definitely put a few things in perspective for me. You had the privilege of being born in 1972” — a year prior to Roe v Wade. “My generation was not so lucky,” Bratcher added, emphasizing that “Over 61 million lives never reached their full potential.”

“How many doctors, scientists, philosophers, and even actors like you and me, never had the chance to leave their beautiful marks on the world?”

In her op-ed, Milano took aim at the budding Georgia film industry -- the “Hollywood of the South,” she called it -- noting that “Georgia’s success in film is no accident. The state’s leaders go out of their way with huge tax incentives that attract these projects.” Though she mentioned being “baffled” by the fact legislators are worrying about “culture wars” which could end up “jeopardizing” their fledgling film industry.

Nice little film business ya got here, Governor. Be a real shame if somethin’ happened to it.

Bratcher would have none of it. “Georgia has its own identity and that it won’t be bowing down to Hollywood anytime soon,” she wrote. “In Georgia, we care just as much about being pro-life as being pro-film … If you fault Georgia for choosing to be morally correct over politically correct, then that says more of your personal agenda than the goal of our governor to protect life, liberty and the pursuit of happiness for all.”

What’s more, Bratcher “couldn’t disagree more” with Milano’s assertion that the “heartbeat bill” would make Georgia the “most regressive state in the country.”

“Abortion is so 1973,” Bratcher said. “Welcome to 2019, a time in which medical advances preserve the life of babies born as early as 21 weeks.”

Amen to that, Ms. Bratcher.