Actor Andrew Garfield: ‘We Can Have a Pansexual Spider-Man'

Playing a superhero is almost everyone’s childhood dream. Most however aren’t thinking about being sexually tolerant and racially diverse as they tie a cape around themselves.

Former Amazing Spider-Man actor, Andrew Garfield, wasn’t satisfied with the web slinging character restricting himself to being a heterosexual white male. For Garfield, Spider-Man and Peter Parker need to get with the times and conform to the nonsensical sexual and racial agenda forced on society.

Recently, in an interview with Mic, Garfield said:

‘I'm excited to get to the point where we don't have to have this conversation,’ he said, ‘where we can have a pansexual Spider-Man….The beauty about Spider-Man, for me, is that he's covered head to toe,’ he said. ‘That's why everyone thinks it could be them in that suit. You don't see skin color. You don't see sexual orientation. You don't see how old the person is, gender, the whole thing. I celebrate that. Anyone can be a hero in their own lives.’

Never mind the fact all the Spider-Man movies are based on the comic in which Peter Parker was a straight white guy. But for Garfield, Spider-Man “is the perfect hero to break the mold” because when in costume, the audience apparently has no idea who is behind the mask, which leaves the door open for the mystery of “it could be anyone!” 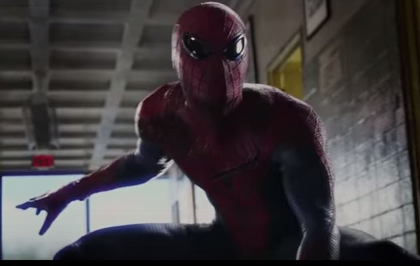 Except for the fact that we all know who is behind the mask – straight white dude Peter Parker. Huffington Post reported Garfield commented, “[w]e’re scared of things that aren’t us,” he added. “Love is Love. Skin is skin. Flesh if flesh. We’re all wrapped in the same thing. I have no preference.” But that preference doesn’t include straight white guys being superheroes.

This was not the first time Garfield advocated for a friendly neighborhood gay Spider-Man. Back in 2013 Entertainment Weekly reported:

‘What if MJ is a dude?’ Why can’t we discover that Peter is exploring his sexuality?  It’s hardly even groundbreaking! … So why can’t he be gay? Why can’t he be into boys?”

Garfield claimed he was somewhat joking about Peter Parker’s sexuality, but two years later and no longer in the role, he is still peddling the same idea.

The absurdity of Garfield’s comments follows the usual liberal tactic of attacking a non-issue and making it an issue. The sexuality or race of Spider-Man is irrelevant to begin with and should be left as it was intentionally created way back when. The whole point of the superhero movie genre is that we as a society like action-packed movies where good triumphs over evil – not to fulfill the ridiculous politically correct agenda that is being forced on us more and more.

But with all of the liberal pandering lately it may come as no shock that rainbow colored webbing may debut in any future, politically correct Spider-Man movies.