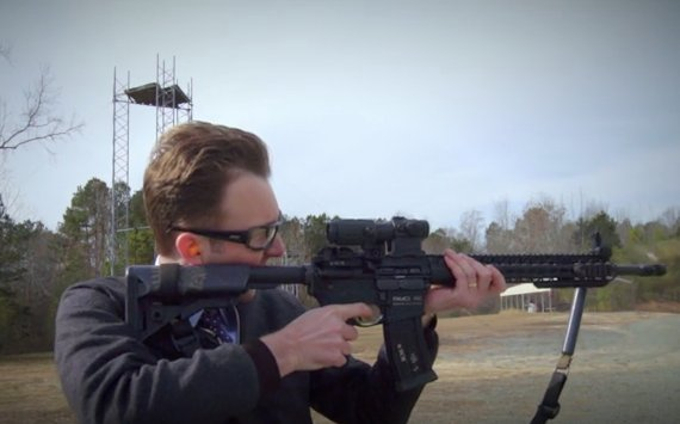 Sunday night, I had the misfortune of watching the Comedy Central premiere of Jordan Klepper Solves Guns. Just minutes into the June 11th comedy special, all was clear: gun owners are “dumb people” with small—what drives liberals’ constant fascination with human sexual anatomy—who are being led like mindless sheep by the big, bad NRA. Although he never mentions the Brady Campaign or any of Michael Bloomberg’s bevy of anti-gun organizations, Klepper dutifully repeats their dogmatic hypothesis: all Americans already support a liberal wish list of gun restrictions which would sail through Congress but for the NRA’s meddling.

Klepper's disdain for the NRA goes so far that he equates NRA lobbyists to Bill Cosby rape apologists. I’m no expert, but that doesn’t seem like the best tactic for making inroads with supporters of the Second Amendment.

I’ll give credit where it’s due. Klepper’s hour-long, anti-NRA agitprop is well edited and snappy. He deftly moves from one debunked talking point to the next and is self-deprecating enough to keep the show entertaining. But after an hour, he hasn’t said much.

Sure, he hits the usual points. Klepper claims it has “been shown that a good guy with a gun does not stop a bad guy with a gun.” If that were true, why would we immediately dispatch armed police officers to stop shootings in progress? If that were true, then how did a gun owner in Norfolk, Virginia manage to stop an armed home invasion on June 9th? How did a 60-year-old woman in Louisiana accomplish the same feat two days earlier? What about this man in Winston-Salem, North Carolina who defended himself against armed robbers in the street with his own firearm on June 5th?

In another segment, Klepper opines that other, more civilized, countries have limited access to guns and by making firearms less available ultimately reduced “gun deaths.” It never ceases to amaze me how “gun deaths” are the only ones that matter to anti-gun crusaders. They never talk about wider effects on crime as a whole. In the real world, as concealed carry and gun ownership has proliferated, crime has fallen. Furthermore, these restrictions only affect those who follow the laws: they have no impact on criminals. In the two years following the UK’s ban on handgun ownership, “the use of handguns in crime rose by 40%.”

Klepper’s coup de grace is a final call for “universal background checks,” which everyone—even those troglodytic NRA members—supports. If anything has become clear during my years of firearms activism, it’s this: “universal background checks” are a hobby horse gun control advocates will never surrender. This policy is supposed to stop the “gun show loophole,” a liberal whipping boy that even Politico has admitted doesn’t exist.

Ultimately, Jordan Klepper Solves Guns was par for the course for the TV gun debate. It was more watchable than most of Hollywood’s anti-gun lectures, but riddled with the same half-baked facts and misinformation, a Daily Show skit writ large which won’t have any meaningful or lasting impact.