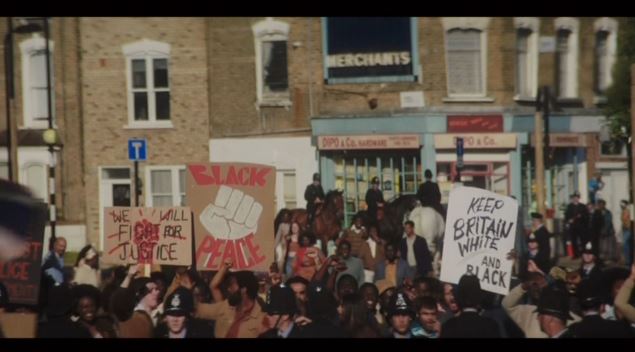 Showtime’s newest series, Guerrilla, premiered Sunday night to bring the rise of the British black power movement in the 1970s to the small screen. The show is tailor-made to feed the worst assumptions about police brutality and institutional racism. At least in the series premiere, the police are depicted as irredeemably corrupt, wantonly abusing their power to terrorize Britain’s black community, the embodiment of the modern Black Lives Matter movement’s most virulent rhetoric.

The main characters repeatedly claim they wish to act peacefully to unite blacks and whites, despite speeches claiming white men do “the Devil’s work” and encouraging imprisoned blacks to “forget the doctrine of good blacks that is being propagated by the racist right-wing press. Nothing ever came from being good." Guerrilla’s season opener makes it clear the protagonists are inherently non-violent, but driven to brutality because of the pervasive corruption of British law enforcement. There is no doubt the police are the villains in this story.

Less than ten minutes into the show, Julian Clarke, who is black, is stopped by police as he and three others walk home from a night on the town. When Julian’s white Irish lover steps up to defend him, she’s met with a baton to the face. Bloodied, the police proceed to give her a “pat down” that would meet every definition of sexual assault.

Days later, the police bribe another black man to throw bricks at the planned march against police brutality giving them an excuse to move in. Clarke is specifically targeted and brutally beaten to death by officers of the “Black Power Desk.”

As if the professional corruption weren’t enough, Guerrilla makes sure to show its audience the police are also morally reprehensible. After bribing a man to justify and cover-up the blatant murder of one of the movement’s leaders who seemed genuinely interested in peaceful demonstrations, an unnamed officer stops for a sexual tryst with a black prostitute–and apparent informant—before returning to his wife and family.

The Black Power Desk was a real division that intentionally provoked violence to justify building legal cases against leaders of Britain’s nascent black power movement. Institutional racism existed. The real-life trial of the Mangrove Nine “forced the judge to acknowledge a level of racial hatred within the Met[ropolitan Police].” But, by all accounts I’ve found, Guerrilla heightened the violence and corruption of law enforcement and the judiciary. In the show, the penal system is equated to a new form of slavery. In the real world, the Mangrove Nine got their day in court, and most were acquitted of all charges.

Just as it was unjust for Julian Clarke to be murdered by police, it was also unjust for Guerrilla main character Marcus to shoot a police officer as he and his wife sprung the far more radical, overtly violent, so-called “political prisoner,” Dhari, from prison. In their desperate attempt to take concrete, visible action after Clarke’s death, Marcus sacrifices his friend’s non-violent idealism, hardly surprising given they got the idea for the prison break from a news report about the Weather Underground. It will be interesting to see how Guerrilla confronts—or ignores—the moral grey areas they’ve just created.