Hollywood is notoriously liberal, but the New York theater scene isn’t far behind. With a three-hour awards ceremony, politics was bound to slip in, especially in a contentious election year. Here are the top five political moments of this year’s Tony Awards.

5. Hillary Clinton Gets an Obligatory Shout Out

Right out of the gate, Actor Jake Gyllenhaal prostrated himself before the presumptive Democratic nominee, declaring “as Hillary Clinton showed us this week, women can do anything.” She certainly can; never before has a major political party nominated a candidate who is being actively investigated by the FBI.

Although no one felt the need to bring up Hillary Clinton’s many scandals, several Tony presenters made sure to digs in on the Republican nominee. Tony Awards host James Corden declared the audience “so diverse that Donald Trump has threatened to build a wall around this theater.” Later in the show, Nathan Lane worked in a quip about Trump University while presenting the nominees for best performing actress in a leading role.

3. The Obamas Couldn’t Resist Inserting Themselves

Whether it’s tweeting a picture of himself to commemorate the 225th anniversary of George Washington’s election or eulogize Mohammad Ali, Barack Obama has a remarkable affinity for making any event about himself. The President and First Lady made sure not to miss out on the Tony Awards spotlight, interrupting the live performances with a pre-taped message gushing over award favorite, Hamilton. 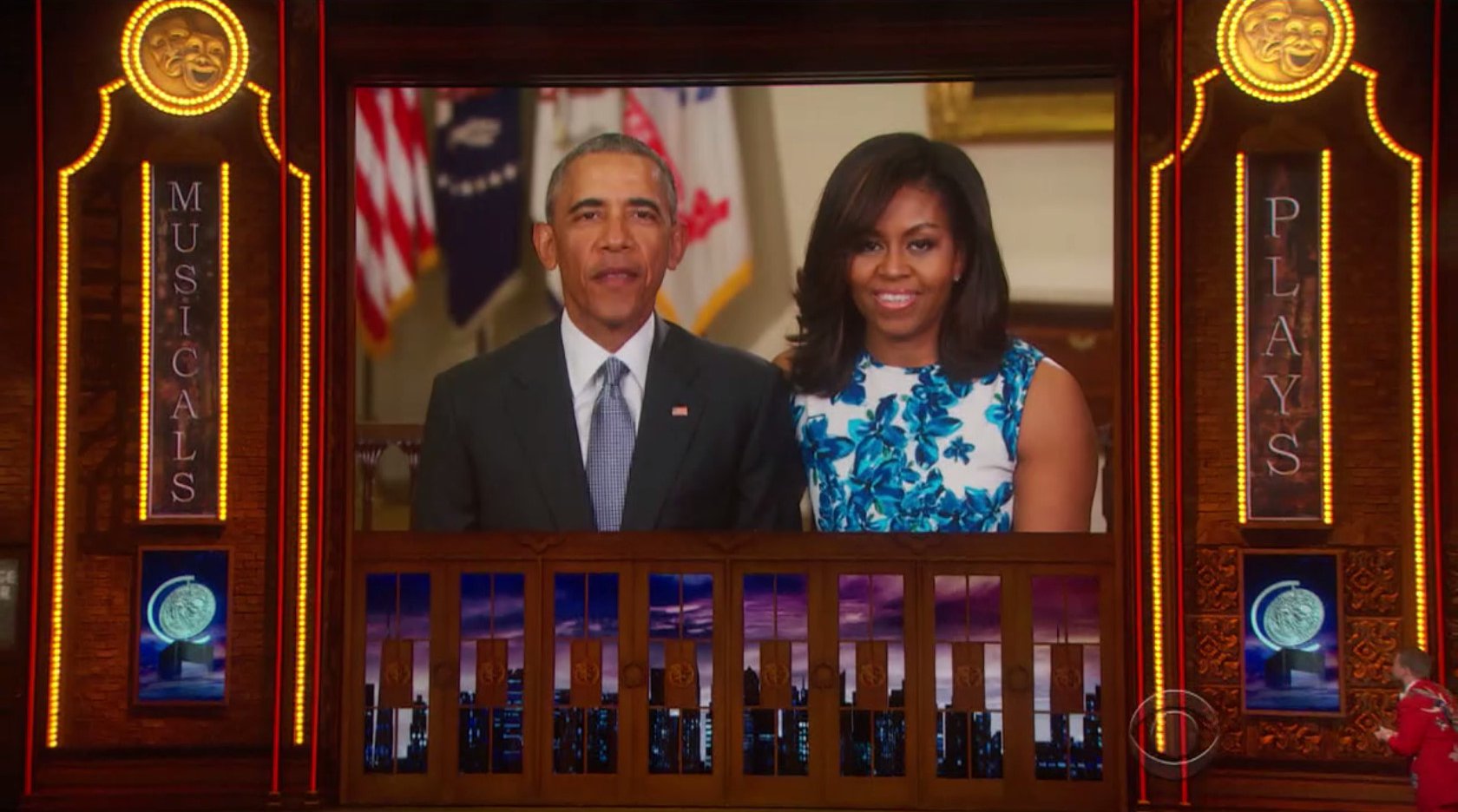 This one takes the cake for a complete lack of self-awareness. Tony Award winners Nikki M. James and Christian Borle gushed over a proposed bill from New York Senator Chuck Schumer that would give special tax breaks to the theater industry. James and Borle note, accurately, that Schumer’s bill would help create and maintain theater jobs. It’s too bad they can’t apply this principle to any other industry.

Announcer: And now, two of the hardest-working actors in this theater tonight, Tony winners Nikki M. James and Christian Borle.

Borle: And, according to our friends at the Broadway league, more than 27 million theater fans attended Broadway shows across the nation.

James: In an effort to preserve this priceless cultural treasure and the many jobs it creates from coast to coast, Senator Chuck Schumer introduced a bill in congress called "The Stage Act."

Borle: Taking effect this year, the bill affords vital tax benefits to Broadway similar to those offered to the film and television industries. Thank you, Senator Schumer!

1. Donald Trump Stars in The Book of Moron

And finally, the number one political moment of the 70th Tony Awards: a planned skit featured the presumptive GOP nominee, Donald Trump, as the star of a fictional play entitled The Book of Moron. While the skit also featured a Hillary impersonator, it spared her from her many scandals. Instead, Hillary benignly warbled about how she “really needs this job.” By featuring both candidates, the Tony’s writers can claim they went after “both sides” even though they treated one candidate with kid gloves while taking a sledgehammer to the other.

Corden: Welcome back, Hamilton and King Charles III are two examples of plays about historical figures, and due to their success we're delighted to announce some new shows that will be coming up in the fall. Opening at the Schubert Theater Andrew Rannells stars as Donald Trump in The Book of Moron.

Rannells: Hello, my name is Donald Trump. And I would like to build a wall that goes straight through your house.

Corden: Now, if that doesn't seem like your type of show, don't worry because there is very much something for everyone. Opening at the Richard Rodgers Theater in November, three-time Tony winner Glenn Close stars as Hillary Clinton in A Clinton Line.

Corden: It is very much up to you which show you buy a ticket for.

Although the participants clearly skewed towards the ideological left, politics did not overshadow the entire event, and there were plenty of heartfelt moments and great performances. Through tears of joy, Hamilton actress Renée Elise Goldsberry gave a passionate acceptance speech stressing the importance of family and thanking the Lord for giving her two children.

Presenter: And the Tony goes to: Renee Elise Goldsberry, Hamilton.

Goldsberry: I have been praying my entire life for the opportunity to stand in front of the world and say thank you to my parents who are here tonight, Ron and Betty. Hamilton has been one, once in a lifetime moment after another. And still test moment of every day is going home at night to my husband, Alexis, I love you much. I would like to thank Tommy and Lin and Jeffry and Jill and Sandy and Oscar and Lauri and Nina and Lilian and Brian, thank you. I would like to thank the entire company of Hamilton. When one of us wins, we all win because we are we are one. I love you. And lastly I would just love to say that if you know anything about me, I have spent the last ten years of my life, what some would consider the lifeblood of a woman's career just trying to have children. And I get to testify in front of all of you, that the Lord gave me Benjamin and Brielle and then he still gave me this! Thank you great God, thank you. Thank you.

Sadly, the terrorist attack on gay nightclub, Pulse, in Orlando, Florida overhung the event. The audience arrived clad in silver ribbons to show support for the victims of the early-morning attack that killed at least 50 people and sent more than 50 others to the hospital. In response to the shooting, the cast of Hamilton removed muskets from their choreography for the show.

While plenty of liberals were blaming guns and the NRA long before opening credits began, the hosts resisted the urge to turn the Tony Awards into a three-hour, anti-gun PSA, and kept their focus on the victims. Perhaps the best example came from Frank Langella, who said tragedy can do one of three things: define, destroy, or strengthen us. I, for one, hope we emerge from this tragedy stronger and more committed to the principles that make America such a uniquely great country.

Announcer: With seven nominations in his distinguished 50 years of acting on Broadway, Frank Langella wins his fourth Tony award.

Langella: Hello. When I first came to New York in 1960 from school I consulted an astrologer who told me that my greatest successes would come late in my career. I thought she meant 30. The fact of the matter is there really is no late in an actor's career. There is just the journey and there's just now. So it is rather ironic that I should be honored with this award for playing a man who is losing his now, who is losing his reality, as indeed my dear brother Andrew is at the moment. I am-- there are so many names I wrote down today to thank you. But I hope they will forgive me if I bring in a dose of true reality: what happened today in Orlando, and I found some words that I think will mean more to you than a litany of names. When something bad happens, we have three choices: we let it define us, we let it destroy us, or we let it strengthen us. Today in Orlando we had a hideous dose of reality. And I urge you, Orlando, to be strong because I'm standing in a room full of the most generous human beings on Earth. And we will be with you every step of the way. Thank you.