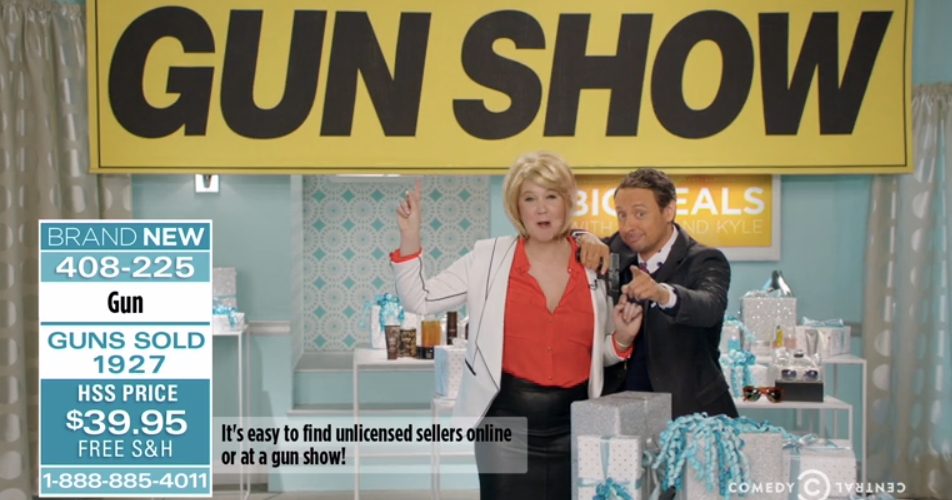 Amy Schumer dedicated the opening of tonight’s episode of Inside Amy Schumer, “Welcome to the Gun Show,” to flaunting her ignorance of United States gun laws. The episode depicts a home shopping network-type show that rebrands itself as a “gun show” to sell handguns at $39.95 each.

For starters, this transaction would be thoroughly illegal. Despite the claims of anti-gun outlets, entering a gun show doesn’t wipe away all gun laws—transactions remain subject to the same legal requirements they would face outside the gun show. Likewise, selling a firearm online doesn’t magically eliminate background check requirements, and it’s still a crime for felons to purchase firearms, regardless of the venue or delivery method.

Although individuals can purchase firearms online, those sales still require the same background checks and paperwork that would be required if the transaction were carried out in person. In most cases, this means the firearm is not shipped to the buyer, but is instead shipped to a federally licensed firearms dealer who completes the paperwork for a nominal fee before transferring the firearm to the purchaser.

In New York, where Schumer’s show is filmed, even intra-state transfers between private sellers are subject to the state’s background check procedures. The only exempt transfers are those between spouses and their children or step-children, e.g. if a father buys his son a hunting rifle. Proceeding with any other transaction without a background check would be a violation of state law.

The Inside Amy Schumer skit sales team’s firearms safety practices are as spot on as their legal knowledge. Amy’s sales partner Kyle demonstrates remarkably poor trigger control, haphazardly waving around the firearm without giving any thought to what he’s pointing at. The duo quickly breaks every firearm safety rule, never once treating the firearm as though it’s loaded. It’s not surprising the segment ends with Kyle shooting himself in the foot. Which is exactly what Amy Schumer did by airing this ridiculous skit.

It's almost as if this sketch was created by a humorless anti-gun nut who knows nothing about firearms and is pushing a one-sided agenda ... oh, wait, it was! In fact, the LA Times reports:

Dial the number on the screen — (888) 885-4011 — and you'll hear a message from advocacy group Everytown for Gun Safety that ultimately connects you to the office of an appropriate member of Congress after giving instructions on exactly what to say to support gun control. Included is a reminder to say "thank you" before hanging up.

The anti-gun lobby is getting big support from Hollywood these days. Exactly week ago, the Brady Center to Prevent Gun Violence got a PSA during ABC's Grey's Anatomy. And yet, despite the celebrity push for gun bans, the American people are becoming increasingly skeptical of gun control.

Americans defending their Second Amendment rights are a frequent target of Schumer's "comedy." Last year Inside Amy Schumer compared birth control to gun rights and she did a gun PSA parody while hosting Saturday Night Live. New York Sen. Chuck Schumer is her cousin and she joined him in advocating for gun control after a shooting at a theater showing one of her movies.