Heresy, Suicide and Murder - 'You, Me, and the Apocalypse' Imagines the Absolute Worst of the Catholic Church 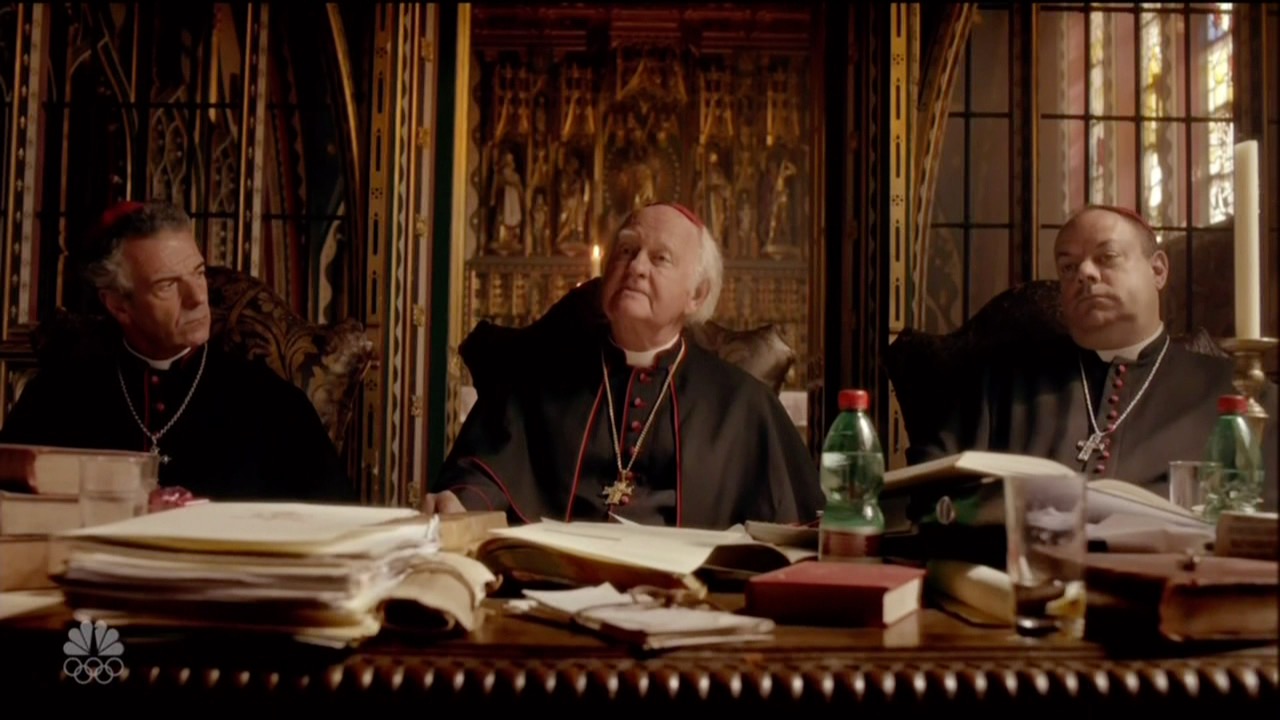 The latest episode of the NBC comedy You, Me, and the Apocalypse “Savior Day” opened with a nun in her underwear literally hiding in a closet to protect her love from the scrutiny of the Catholic Church, and only went downhill from there.

Back after secretly shattering his vows to God by marrying the nun while on a mission to investigate self-proclaimed messiahs, Father Jude (Rob Lowe) is summoned to appear before a tribunal of Cardinals where he is asked to nominate a “contingency messiah” from a list of false prophets.

Jude: Get in the closet!

Jude: Do you have a better idea? Go! Yes?

Jude: It's often the first sign of madness. To what do I owe this pleasant visit?

Father Christophe: The cardinals request your presence at an urgent meeting to discuss the implications of Operation Savior. They would like a full status report on all your would-be Messiahs.

Jude: All right. Where were we? What?

Celine: I don't want to have to hide in closets.

Jude: I know. We both agreed our work is too important to walk away from it. We have to finish what we started.

Celine: And how long will that take?

Jude: I wish I knew. I wish it didn't have to be like this, but…

Celine: I had a dream last night. Me and you, in Florence. Watching the sunset, holding hands. It sounds cliché, I know, but it was wonderful. Just you and me. A man and a woman being ordinary people. And then I wake up. And before I know it I'm in the closet. I've never been to Florence.

The Savior Missile might not successfully divert the sweet meteor of death hurtling towards Earth, explain the cardinals. If it fails, giving Catholics hope by anointing a false messiah is more important to the assembled clerics than keeping true to their faith in the Almighty. In doing so, these cardinals would sell out the faith of 1.2 billion Catholics and another billion non-Catholic Christians.

Jude: No, I told you. He's just a cheap stage psychic.

Jude: The new Messiah? No. No. Absolutely not.

Father Christophe: Is this the six-year-old who rose from the dead? I thought she sounded promising.

Jude: Well, she wasn't. She' just an ordinary little girl. We should leave her be. What... What is going on here? And enough with the stolen glances. If you two want to have sex, go get a room.

Jude: What is going on here? I've never seen these two before! And why are we meeting down here?

Cardinal Crawshaw: Consider this an informal steering committee to discuss the theological implications of the current situation.

Father Christophe: We know the candidates are, on the whole, unsatisfactory. But with our future dependent on these missiles, we must have a contingency, yes?

Scotty: T minus one minute.

Man 1: Roger, one minute and counting.

Scotty: Thank you. All systems go. Good luck, everyone.

Father Christophe: If Saviour succeeds we have no problem, the world is not ending. It is not the final judgement. But if Saviour fails, and the end really is nigh, is it fair to send the faithful to their graves stripped of all hope?

President: This is the dawn of the New American Century, General, I can feel it. This is about looking the Chinese in the eye and saying, "We still run this town." If it works, they put me on Rushmore!

Father Christophe: The people need hope. We promised them a Messiah. So we must give them one. Whether we believe in him or not is inconsequential.

Jude: Are you saying what I think you're saying?

The cardinals’ abdication of their spiritual and moral duty to the faith prompts Father Jude to leave the priesthood, choosing to live a happily married life with Sister Celine Leonti (Gaia Scodellaro) rather than to continue serving a corrupted church. But before Sister Celine can accept his proposition, Father Jude is found hanging in his office.

For a formerly skeptical priest so newly recommitted to the faith to take his own life is incredibly jarring. For Catholics, suicide is a particularly heinous offense that would damn Jude to hell. But the alternative implied by the show—that Father Jude was murdered by the group of cardinals he walked out on—is even worse. Priests aren’t perfect, but You, Me, and the Apocalypse asks viewers to believe that a group of the Roman Catholic Church’s most senior adherents would suddenly cast aside their faith in a time of crisis, violating at least two of the Ten Commandments in the process by murdering their fellow priest and knowingly promoting a false messiah.

It’s unclear how the show can write itself out of this plotline, but I doubt the writers have any interest in doing so. The show has consistently attacked the church, and shows no sign of relenting.