Cosmo Looks at Hillary and Says, ‘OMG, Me!’ 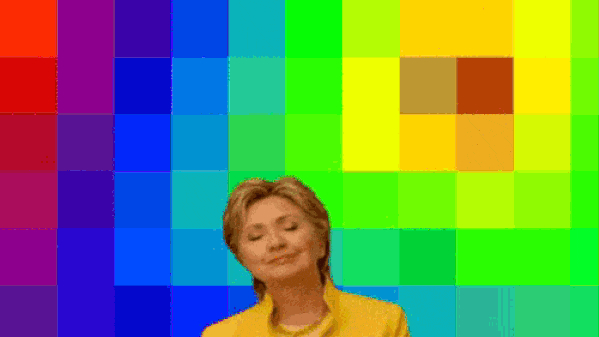 For Cosmopolitan, it’s not enough to be “with her.” Hillary can’t just be a political compromise. Cosmo thinks you have to like her—to think she’s cool and “flirty.”

Topping the article was the smug, closed-eyed Hillary in front of a pixilated rainbow backdrop.

The article hyped the Hillary-is-attractive message.

Hillary isn’t just attractive; she’s also fun. Don’t believe it? Cosmo lets you watch a GIF of a large woman gyrating her backside against a bouncing Hillary. The caption reads, “When you’re turnin’ up.” It doesn’t appear this GIF required any Photoshopping…

That wasn’t the only GIF joking about Hillary’s drinking parties. Another showing Hillary smoothly winking, read, “When a friend turns to you in the club and asks if you’re drunk.” A third, showing Hillary raising her hands in confusion, read, “When your roommate asks where the bottle of wine went.”

But in case you get the wrong message, Hillary isn’t all fun and games. She is powerful, especially when it comes to men. One GIF showed Hillary “fake laughing” “at a man’s bad joke.” Another showed her rubbing her temples, when her “bro friend (sic) Todd trolls you by asking if something is feminist.” A third showed her looking bored as she listens about “his” “‘crazy’ ex.”

More importantly than any of this, Hillary is fit for office. One GIF showed her wiping dust off her shoulder. It read, “When you when the fight.” Hillary also likes “dropping truth bombs.” She says things like, “Women’s rights are human rights.” She will also apparently knock back a whole glass of wine when her “racist uncle starts talking about #AllLivesMatter at family dinner.”

Finally, Cosmo ended the article with a crying smiley-face emoji, which read, “When you’re the first female presidential candidate.”