E! Entertainment Television isn’t planning to celebrate America’s independence from the crown this Fourth of July. Its greatest patriotic effort has mustered one article about red-white-and-blue apparel and another about holiday-themed make up. It will, however, be broadcasting naked celebrities in bed with Kanye West.

There doesn’t seem to be any indication Kanye or E! asked permission to broadcast Kanye’s interpretations of these celebrities’ nude forms. 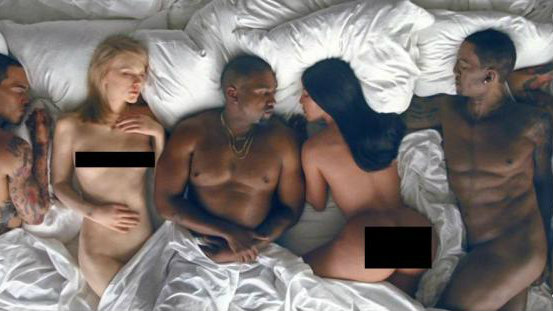 The crude song also alludes to Kanye’s plans to have sex with Taylor Swift, who disavows giving permission for this to be put in the song.

“For all my Southside niggas that know me best\ I feel like me and Taylor might still have sex\ Why? I made that bitch famous (God damn).”

E!, which has 98 million cable and satellite subscribers, is part of NBCUniversal.

To top it all off, pop singer Rihanna provides unattributed vocals for this song. Rihanna has a history of making incredibly violent music videos, which glamorize non-consensual sexual behavior.

On a related note: This same E! lauded Lady Gaga’s “powerful” performance in February, when she and Vice President Joe Biden were raising awareness of college sexual assault and the importance of consent. Apparently, neither consent or patriotism matter to E!