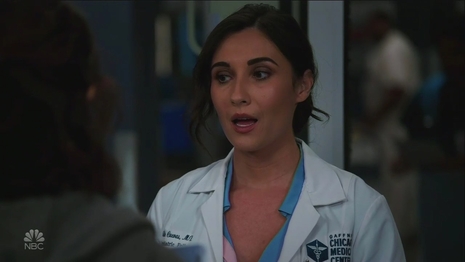 NBC's medical drama Chicago Med revealed that a doctor on the show is an illegal immigrant benefitting from the Deferred Action for Childhood Arrivals (DACA) program.

On Wednesday's episode, "Everyone's Fighting a Battle You Know Nothing About," Dr. Nellie Cuevas (Lilah Richcreek Estrada), a new character this season, reveals that her family immigrated to the United States illegally when she was a child and she is "undocumented."

Early in the episode, a young woman named Gloria (Dani Oliveros) arrives at the hospital after being drugged and sexually assaulted at a warehouse party. She's very skittish about having any of her personal information recorded and doesn't want to report the rape to the police.

Dr. Hannah Asher (Jessy Schram), the ob/gyn treating Gloria, tries to encourage her to file a police report, but Dr. Cuevas, a psychiatrist, suspects Gloria's reluctance to give any information is due to her illegal status.

When Gloria is about to be discharged, Cuevas reveals a secret to both Gloria and Asher.

Cuevas: I'm undocumented. My family immigrated to the U.S. before I could walk. And as a DACA recipient, I'm legally allowed to work and live here, but I still keep my immigration status close to the vest.

After Cuevas tells her own status, Gloria feels secure enough to report the rape to the police.

Later in the lobby, Asher and Cuevas talk about Cuevas' situation.

Cuevas: Hannah, like I said to Gloria I don't advertise my status.

Asher: It's your business, nobody else's. I won't tell anyone.

Asher: It is incredible, what you've accomplished. Going to med school, becoming a doctor.

Cuevas: It hasn't been easy. And with legal challenges constantly on the horizon, DACA's future and my future always feels a bit precarious. But surrounding myself with good people really helps. People I can trust.

Chicago Med plays to the audience's heartstrings with a fictional story of a successful doctor who benefited from DACA.

For balance, will any network write a script about one of the thousands of illegal aliens awarded DACA who later committed serious crimes? Due to a lack of background checks, many criminals with prior arrests benefited from the program. Somehow, that reality never makes it into a television script.

Last month, a federal judge declared the DACA program illegal. The ruling made clear that former President Barack Obama's administration had overstepped its authority and contradicted the Immigration and Naturalization Act.

“DACA creates a new class of otherwise removable aliens who may obtain lawful presence, work authorization, and associated benefits,” the ruling read. “Congress determined which aliens can receive these benefits, and it did not include DACA recipients among them.”

But who cares about the pesky U.S. Constitution when you are on a social justice crusade?

Chicago Med has had previous episodes about illegal immigration that also align with the Democratic party narrative. This latest episode premiered just as Senate Democrats are pushing again for DACA amnesty during a lame duck session.

It must be just a coincidence that television shows always seem to march in lockstep with the Democratic party's agenda.