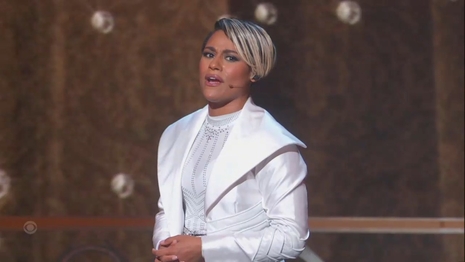 Ariana DeBose, who won an Academy Award for her portrayal of Anita in West Side Story, hosted the show. While DeBose is far more talented than the disastrous hosts of this year's Oscars, she nonetheless gave an opening monologue fixated on race and gender identities.

DeBose: I'm so proud that the theatre is becoming more reflective of the community who adores it. ( Applause) In doing so, it has gained new performers, new creatives, and new fans. It has shown us stories that have broadened our world and opened our hearts and minds.

While we have not solved all of our problems, I feel like the phrase "Great white way" is becoming more of a nickname than a "How to" guide. ( Laughter) ( Applause) And here's why: This season featured new shows written by seven black playwrights. Yeah! It brought us a gender-flipped production of "Company." ( Applause) And tonight, Lynn Nottage is the only playwright ever to be nominated for both best play and best book of a musical in the same season. (Cheers and applause) Yes. L. Morgan Lee is the first openly transgender performer to be nominated for a Tony, and she won't be the last. Scenic designer Adam Rigg is the first out agender nominee. Composer Toby Marlow is the first non-binary winner. Wow.

If you are wondering what "agender" means, it's apparently a low-effort, gender-neutral addition to the alphabet soup that can even mean not caring about gender at all.

I can only imagine some poor, talented designer or actor seeing DeBose's intro and making notes of new vague letters that pass rainbow mafia approval to up their chance at a nomination.

In tune with Pride month, the winner of Best Musical was A Strange Loop. Co-producer Ru Paul introduced A Strange Loop as "the big, black, and queer-ass great American musical for all!"

Here is a musical number from A Strange Loop.

Chorus: ♪ How many minutes til the end of intermission? ♪ Is that how the show should open? ♪ Should there even be a show? No, it should start with ♪ what he's thinking which is just a cursor blinking ♪ cause of all of the directions ♪ that the narrative could go?

Usher: He wants to show what ♪ it's like to live up here and travel the world in a fat, black queer body.

Chorus: ♪ How many minutes til the end of intermission? No one cares about a writer who is struggling to write. They'll say it's way too repetitious and so overly ambitious which of course makes them suspicious that you think you're trying to be white.

Usher: He has to fight for his right to live in a world that chews up and spits out black queers on the daily.

The lyrics go onto say, "If you can't please the Caucasians you will never get the dough. Cause critics clinically deny us then deny implicit bias with their vanity supported by a system that's distorted."

Between mockery of "the great white way" and antagonism about "cis-het whites" taking up "space," the whole evening began to feel less about "inclusion" and more about attacking white and heterosexual people generally. This is an increasingly common pattern in our post-BLM, post-Obergefell country.

Broadway has been struggling in the wake of COVID lockdowns. Televising an awards show that speaks of pale-skinned and heterosexual people as though their very existence was a nuisance to those who create and perform on Broadway is not the way to get future tourists and audiences to buy tickets.

Did the big brains of Broadway learn nothing from how audiences have fled woke streaming services like Netflix? At the end of the day, shows need people in the seats and only the most brainwashed leftists will pay big bucks to sit in a theater for hours and hear about all the ways woke creators think they suck.