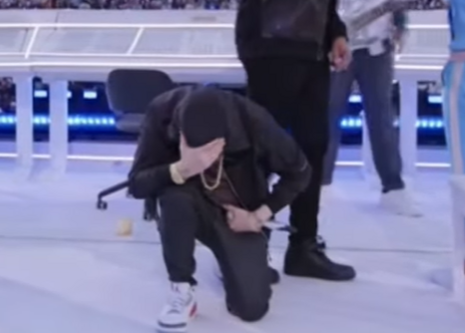 This year's Super Bowl halftime show was a late nineties/early aughts throwback featuring a number of  rappers whose biggest musical hits are twenty years old. Perhaps to stay relevant, one of those rappers, Eminem, took a knee during his performance.

The rapper who once sang, ”All the girls I like to bone have big butts/ No they don’t, ’cause I don’t like that n—– sh–/ I’m just here to make a bigger hit” and ”Blacks and whites, they sometimes mix/ But black girls only want your money, ’cause they’re dumb chicks” is now ready to fight for racial justice!

Left-wing media from NPR to Yahoo said Eminem's knee moment was done in solidarity with Colin Kaepernick. I guess saying it was in solidarity with Black Lives Matter (BLM) no longer plays now that the domestic terrorist organization has taken corporate shake-down money and run.

Sports Illustrated praised Eminem's actions in a now-deleted Twitter post that included a power symbol hand-fist emoji. The magazine used a white hand emoji, which I think goes against woke rules, but I can't keep up.

Matt Walsh noted the ridiculousness of Eminem's woke virtue-signaling after the singer spent his youth rapping about murdering homosexuals.

"These are the payments Eminem must keep making to the woke gods so they don't notice that he spent the first ten years of his career rapping about killing gay people," Walsh wrote in a quote retweet of the deleted SInow tweet.

These are the payments Eminem must keep making to the woke gods so they don't notice that he spent the first ten years of his career rapping about killing gay people https://t.co/J1l74QS4FM

According to the Post Millennial, the rapper "planned to take a knee during the Super Bowl halftime show but was shot down by the NFL."

Eminem did it anyway, but that hardly makes his actions courageous. The middle-aged rapper faces no risks in towing the contemporary left's cultural line. Authentic cultural risk-taking can cause financial and professional loss, such as Enes Kanter Freedom getting cut from the NBA for speaking out against Chinese Communist Party genocide. Kanter, unlike Colin Kaepernick, will receive no multi-million deals from the corporate oligarchy for his actions.

Eminem's most successful days are long behind him. If anything, taking a knee gives the has-been a brief moment of old attention. Sad.