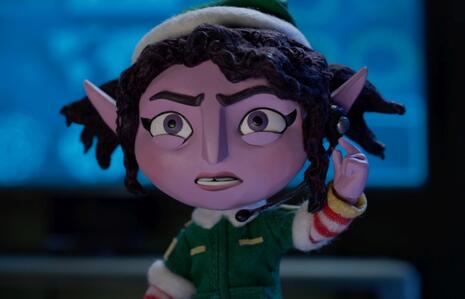 HBO Max's new series, Santa Inc. (released Dec. 2) may be one of the nastiest, most hate-filled Christmas series ever. It has also managed to score some of the lowest audience ratings ever on both IMDB and Rotten Tomatoes, but star Seth Rogen is bizarrely blaming the series' failure on "white supremacists."

Santa Inc.'s North Pole is a vulgar, twisted world where even characters the audience is supposed to root for are vicious and unlikable. There is so much offensive content, it is almost too much to chronicle. The male characters in the series are creepy, sexually predatory misogynists (the writers must have confused the North Pole with Hollywood) and the women tend to be vulgar, mean, or weak.

This Christmas series also spends an inordinate amount of time talking about and promoting abortion. The main character, an elf named Candy (Sarah Silverman), tells her brother during a fight, "I'm gonna finish that abortion mom tried to have 35 years ago."

When Candy gets an offer to work for the Easter bunny instead of Santa, she initially rejects it because "a company that denies a woman her bodily autonomy, even for religious reasons, is not for me." You see, Peter Rabbit's (Patton Oswalt) daughter, Petunia Rabbit (Aidy Bryant), was fired from Easter Enterprises for having "thousands of abortions." Petunia rails that her father is a "hypocrite hiding behind religion" and tells a reporter, "Who cares about my personal life?"

Candy ultimately goes to Easter Island to meet with the Easter Bunny where the bunnies of Easter Island insult Christianity in the worst terms imaginable. "I mean, resurrection, it's bullshit, right?" the Easter Bunny's son tells Candy. "Fuck the resurrection. Peter Rabbit will be the new Jesus," Peter Rabbit says as he plots taking down Santa, Inc.

The show is generally anti-natalist and anti-family throughout. An animated cookie who has a baby complains about how her body was "wrecked by childbirth." The cookie's husband, the only family man in the show, is constantly berated by his wife.

Candy herself hates children but wants to become the next Santa to beat the patriarchy. "The position of Santa had mostly been a white man's game," her grandfather explains. She thinks it is time a "vagina finally sits in the red suit."

SJW dialogue is peppered throughout each episode. Candy tells Santa, "More American kids believe in you than they do in vaccines or the Holocaust," while an elf says, "Thanksgiving is based on an imperialist lie." There are lines about "global-warming" and "slut-shaming." Much of the dialogue is a broken left-wing record.

Since Candy is an efficient manager, but hates children, Santa (Seth Rogan) offers to let her run Santa, Inc. after he dies while a young, fat white kid who is good with children becomes the next face of the company. Santa calls himself the "most progressive Santa in history" and a "supporter of women's rights." While touting his progressivism, he exploits the workers and is selfish to his wife.

Since Candy wants to improve conditions for workers at Santa, Inc., it would have made sense for her to take Santa's offer and reform the company from within. Instead, the script goes full communist. Candy steals Santa's sleigh and gets arrested. She receives "bail from an anonymous Super PAC" and prepares to "start the revolution" for "all the workers oppressed by Santa, Inc." She uses the secret code "AOC was cancelled" to coordinate a walkout with fellow workers on Christmas Eve night. "Operation Fuck Santa" commences and workers hold signs with phrases like "Justice is coming to town" and "No Justice, No X-Mas."

Candy even leaves a reindeer, the heir to Rudolph, to die in a snow bank after she accidentally hits him with her car. She says of his murder, "What if I did something really bad, but, you know, ultimately, it - it's for the greater good?"

Mrs. Claus (Maria Bamford), who has now left Santa, makes a rousing speech on Christmas Eve to the protesting workers about the need for health care and maternity leave. Desperate, Santa takes Candy aside and agrees to her terms because of all the dirt she has on him. The series ends with a close-up of the reindeer Candy hit with her car still abandoned and left for dead on the side of the road. Merry Christmas.

The question is why would anyone greenlight such an awful series? Did HBO think anger over the offensive content would generate interest and viewers? Even if someone clicked one episode or two out of curiosity, it is hard to imagine anyone suffering through all eight episodes of this mess without being paid to do so (you're welcome). Leave it to woke lefties Rogen and Silverman to make one of the worst Christmas specials ever.