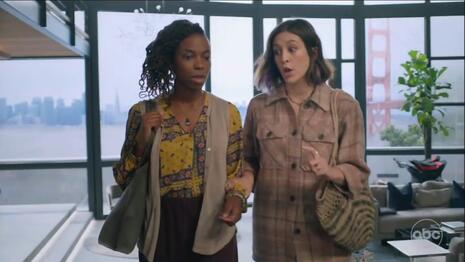 Ever dream of dating a woman where you talk about "environmental racism," "climate warriors," and "late-stage capitalism"? Well, a rich businessman went through that nightmare on the ABC sitcom Home Economics. It makes you wonder how much a guy is willing to torture himself for a woman.

Soon Connor goes from “the brother destroying the environment” and “exploit[ing] the masses” to spouting left-wing talking points around Lindsay. "I was making my first batch of almond milk when it hit me. We gotta stop killing cows for milk," he says.

"He's got a long way to go, but he's willing to learn. And I enjoy being his tutor," Lindsay tells Sarah happily.

Sarah is troubled. "...Connor's wokeness, it's so obviously just an act to impress Lindsay," she privately tells Denise.

As the episode progresses, Connor goes to the mat to woo his new girlfriend with woke beliefs. He opens up his mansion to Lindsay for her book club "where members discussed novels by and about oppressed women" and even studies up on the 500-page book about "climate refugees." Actually, he has his housekeeper, Lupe (Lidia Porto), read it aloud while he works out.

Sarah becomes particularly frustrated when Connor joins the book club and tries to catch him unprepared.

Denise: I was thinking about--

Sarah: What did you think of the book, Connor?

Connor: Um, the book? I think... You know, I think Saanvi's journey really resonated with me. I mean, I must admit, I wasn't very educated on the refugee crisis, so this was a big eye-opener for me about environmental racism.

Sarah: Did he actually read the book?

The term "environmental racism" is the perfect blend of all things virtue-signaling leftists love. It blends elements of climate hysteria and "anti-racist" Marxism into a big "social justice" blender. You can see why Lindsay's book club would like it.

Frustrated with the success Connor is having at the book club, Sarah takes him aside to argue with him, but he deftly throws her woke ideology back at her.

Sarah: Wearing a hemp shirt for a hot girl doesn't make you a humanitarian.

Connor: Whoa, reducing women to objects? Sarah-- -I thought you were better than that.

Feminism, environmental racism and veganism -- Connor is mastering it all. But, of course, a woke book club discussion is incomplete without lots of climate discussion and decentering "whiteness." So, when Sarah and Connor get back to the book club, Connor goes all in on the lingo.

Connor: And I think that although Saanvi is my opposite, I do see myself in her, or rather who I hope to be. A climate warrior and a citizen of the world.

Lindsay: Sarah, do you have something to add?

Denise: I actually do. I read the book twice: Once to let it wash over me, a second time to really dig into why this book struck a chord with me, and I really think it's because--

Sarah: Connor, when you say, "Citizen of the world," is it because you went to Cabo for spring break five years in a row?

Connor: It was six, but Sarah, as white people, we need to cede the floor to women of color.

Sarah: That woman of color is my wife, and your allyship is performative. [All gasp]

As Sarah grows increasingly frustrated and confrontational with Connor, Lindsay asks Sarah to leave. Back at home, Denise gets Sarah to admit that, like most leftists, she just likes to hold her moral superiority over Connor with all of her virtue-signaling.

Denise: Is it because you're uncomfortable with him being on the same side as you? 'Cause he's taking the moral high ground, and that's where you like to hang out?

Sarah: [Laughing] Oh. You think that I need to feel superior to Connor? That is not--I just--I don't--Don't just keep staring at me when you know that you're right.

In the end, Connor and Lindsay break up amicably. She feels he is getting a little too serious in the relationship after he buys her an 8% stake in a Canadian wind farm. Connor and Sarah make-up and Connor tells his sister he appreciates her for her beliefs.

The most honest moment comes from the housekeeper Lupe when she joins Lindsay at a another book club meeting as the episode closes.

Lindsay: And ultimately, I think the novel is a thrilling indictment on late-stage capitalism.

Lupe: Lindsay, I'm going to say what we're all thinking. 800 pages to tell me this lady feels bad that she's rich? Please. Huh?

Everyone in the room applauds. If only more people could be as honest as Lupe in the face of woke nonsense.

This rant was brought to viewers in part by Neutrogena, Downy and Clairol's Nice N' Easy. You can fight back by letting these advertisers know what you think of them sponsoring such content.