‘Brooklyn Nine-Nine’ Goes BLM: Even ‘Good’ Cops Are ‘Part of the Problem’ 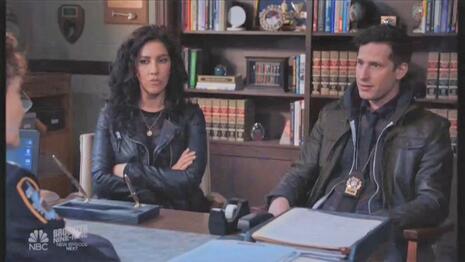 After scrapping the first four episodes in the wake of last summer's George Floyd protests, the NBC "sitcom" Brooklyn Nine-Nine's final season finally premiered with a new episode promoting Black Lives Matter. The entire episode implies that it is rare for cops to not be corrupt, racist villains and that most are secretly bad people.

The episode "The Good Ones," on Thursday, August 12, laid on thick the same tired BLM narrative of evil cops targeting innocent black people and getting away with it. The title "The Good Ones" refers to cops who claim to be "the good ones" but are really just another cog in the white supremacist system.

The episode begins in June 2020 with Detective Rosa Diaz (Stephanie Beatriz) announcing that she is quitting the force. In present day, Captain Holt tells his colleagues during a gathering at a local bar the reason Diaz left the force. "She quit after George Floyd was killed because she thought that she could do more good by becoming a PI that helps victims of police brutality," he says.

While at the bar, another white detective on the force, Charles Boyle (Joe Lo Truglio), repeats words from a podcast he is listening to called "Two Wrongs Makes a White: Lessons in Anti-Racism" about "The hundreds of years of oppression experienced by black people in this country, oppression they still experience to this day." According to the show, Boyle went "full Schumer" on Juneteenth and wore African garb. Boyle later puts money in a black lieutenant's personal account as "mini-reparations" before donating to a "black trans charity" instead as a public virtue-signal.

But beyond that cringey Boyle sub-plot, the episode pushes more of the evil cop script that was repeated in over 100 television episodes last year. We get it, Hollywood. You are going to do everything in your power to kowtow to the domestic terrorists known as BLM until you have lost every last audience member that once watched your shows.

After Rosa quits the force and becomes a private detective, she takes on the case of a young black women assaulted and wrongfully charged with resisting arrest by officers. Her friend, Detective Jake Peralta (Andy Samberg), wants to help her with the case to prove "the system can still work sometimes when good people are involved," so they listen to her story.

Rosa: Would you mind telling us what happened from the beginning?

Client: Sure. I was walking home from the pharmacy when two uniformed cops stopped me and asked me what was in my bag. I said nothing, just some personal items. But then they kept bothering me, saying, well, if it's nothing, I should have no problem with showing them. But in my mind I'm like, why do I need to show them my new loofah?

Rosa: You don't. It's your loofah.

Client: Thank you, Ms. Diaz. It is my loofah. Anyways, I said I wanted to go home, so I tried to walk past them, and they grabbed me. Suddenly, I'm thrown on the ground and they're yelling at me to stop resisting, which I wasn't. I was just scared. Then they threw me up against the squad car, saying they was arresting me for assaulting them. I'm the one who got the black eye and bruises all over my body, but somehow I assaulted them?

Rosa: Do you remember what time of day it was?

Rosa: So right at the end of a shift.

Rosa: Some officers like to make arrests at the end of their shift so they can work later and get extra overtime.

Diaz: That is so wrong.

Peralta: It is. But I promise you, we are gonna get you justice.

But, of course, the body cam footage was corrupted so they can't prove the client's story. Finally, Rosa finds and steals the original footage and gives it to Captain Lamazar, the police captain of the precinct involved who says she will help if they find proof, but she promptly deletes it.

Lamazar gets the offending officers to revise their statements and drops the charges against the woman wronged, but refuses to punish them because she considers the process of getting the officers suspended or fired too difficult. The client never gets her justice because the system is too inherently corrupt, as the show so helpfully explains, with Lamazar considering herself one of "the good ones."

Jake: Why'd you delete it? You said you'd help us if we got proof.

Lamazar: Yeah, but I didn't think you'd get proof, get proof. I thought you just, you know, get proof. There's proof and there's proof. You got the wrong kind of proof. I don't know how much clearer I can be.

Jake: So you were never gonna help us?

Lamazar: I am helping you. I can still get the charges against your client dropped. Now that I saw that footage, I'll get my officers to revise their statements.

Jake:  And they'll be punished?

Lamazar: No, there's no way I can suspend them.

Jake:  Suspend? I thought you would fire them.

Lamazar: [Snorts] Oh, you're being serious now. Huh, I guess jokes aren't our thing. Well, if I fired them, it would trigger the union's appeal process. PBA's grievance proceedings allow for both unions and individual officers to challenge personnel actions by superiors. The complaint gets sent up the chain of command till they get someone who sides with the officers. And the courts are a nightmare. Prosecutors work closely with cops. They're not gonna jeopardize their relationship by pursuing cases against them. All the officer has to say is he feared for his life, and it gets thrown out.

Jake:  Look, we know all of this, but that doesn't mean you just give up.

Lamazar: Okay, so say I don't give up and I get the commissioner to agree to fire the officers. Do you know what happens next?

Jake: Yeah, I hear it, Rosa. You can stop staring daggers at me. Let's just go.

At the end of the episode, Jake admits, "Maybe I am part of the problem," and Rosa says that she gave up "my career, my friends, my whole life, but I did it because I couldn't ignore what I was a part of anymore, couldn't ignore what the police are doing in my community to people who look like me." (Meanwhile, Rosa is a white-passing Latina.)

With more than 127 episodes of this cookie-cutter BLM dialogue in television shows, listening to it again feels tiresome, to put it mildly. There was so much left-wing hectoring in this premiere that it is hard to believe Brooklyn Nine-Nine is supposed to be a sitcom. Thank goodness this is its final season.

This rant was brought to viewers in part by Progressive, Samsung and Bounty. You can fight back by letting these advertisers know what you think of them sponsoring such content.