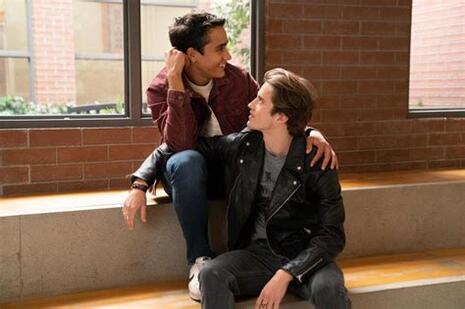 The release of the second season of Hulu's LGBT teen drama Love, Victor targeted two groups with its LGBTQIA agenda: children and churches.

The previous season of Love, Victor had glamorized a troubling pederastic scenario in which high school sophomore Victor (Michael Cimino) was ogled and hit on by adult men at a gay bar.

The second season, which arrived on Hulu on Friday, June 11, again introduced an adult gay bar scene, this time with Victor, now a high school junior, sneaking his homosexual virgin friend Rahim (Anthony Keyvan) into a gay bar. This happened the day after Rahim came out to his devout Muslim parents who were supportive. At the bar, Rahim happily put dollar bills down an underdressed adult man’s pants.

But this season really aimed its agenda at parents who think the subject of homosexuality ought to be handled delicately with pre-pubescent children as well as priests who uphold Catholic teaching on homosexuality.

Victor has an elementary school aged brother, Adrian (Mateo Fernandez), and his parents, who are still coming to terms with the news that their son is actively homosexual, are waiting until they feel the time is right to tell Adrian that his big brother has a boyfriend.

But Victor’s boyfriend, Benji (George Sear), resents the parents’ position. Victor’s mom, Isabel (Ana Ortiz), argues with Benji and Victor after she catches them having sex in Victor’s bedroom while little Adrian is in the adjoining room. Adrian walks in to ask what their fighting about and Benji blurts out that Victor is gay.

Benji: What do you mean by ‘that’?

Isabel: I mean having sex with Adrian in the next room.

Benji: Look, that was awkward for all of us, but we’re in a serious relationship. She wouldn’t be acting like this if she’d caught you having sex with a girl.

Adrian: Why is everyone yelling?

Isabel: It’s nothing, mijo. Victor just knows he’s not allowed to have friends over without asking.

Benji: He’s not my friend. He’s my boyfriend.

Isabel: You need to go.

Benji never apologizes for disrespecting Isabel’s boundaries and not allowing her and her husband to approach the issue with their child on their own timetable (or for jumping into bed with his boyfriend in their apartment, for that matter). In fact, toward the end of the season Isabel instead apologizes to Benji for not making him feel welcome enough in her home.

But no need to worry about little Adrian. When he talks to his mom and dad the next morning after the argument he explains that SpongeBob is gay and one of his classmates has two moms. Nickelodeon to the rescue.

Benji is not the only one to fail to consider Adrian’s age. When Adrian’s sister, Pilar (Isabella Ferreira), is babysitting him with Rahim, Adrian puts Jennifer Lopez’s stripper movie Hustlers on the television. “What’s a lap dance and why is it expensive?” Adrian asks them. Accidentally exposing young children to sexually inappropriate moments and content has been a running “joke” in Hollywood for decades. Nobody asks why.

During the first season of Love, Victor it was clear that Victor’s parents were practicing Catholics. This season, the Catholic parish becomes the family's enemy. Victor walks out of church to the sounds of ominous music while his mom is singing. Isabel, after embracing Victor’s new sexual lifestyle, yells at the parish priest. Apparently, the priest had convinced little Adrian that Victor is going to hell, as though priests are likely to be so cold that they would handle the situation with a young child that insensitively.

Isabel shows up in the priest's office and tells him, “I have been raised to believe a lot of ugly things, Father. Things that it’s probably gonna take me the rest of my life to unlearn. But I will unlearn them.”

“So I told off a priest,” Isabel proudly tells Victor the next day.

Biblical teaching on human sexuality is an “ugly thing” Christians need to unlearn? No doubt in the ideal radical activist LGBTQIA world, Christian rituals and theology would be replaced by the almost ritualistic celebration of homosexual activity that accompanies gay pride month, often without any regard for children present.

Like so many current teen dramas, Love, Victor reflects the hedonistic spirit of our age and is another sad commentary on Hollywood's degradation of our culture.