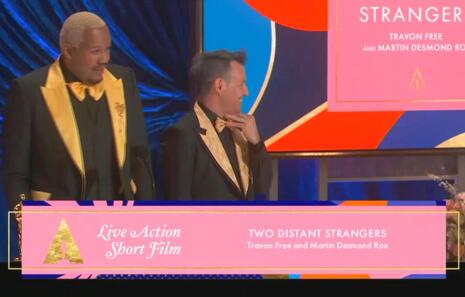 This year's Academy Awards show was an unwatchable train wreck of BLM virtue-signaling and bad lighting. A freshman film student could have produced a better show than this mess.

Communist writer James Baldwin seems to be popular with BLM supporters. Baldwin was also quoted in a hate-filled, anti-police performance at this year's Grammy's.

Is Free not aware that the overwhelming majority of people killed in police confrontations were armed and dangerous? Does he think police just roam the country hunting people? Perhaps he thinks the police officer who recently saved a young woman's life by shooting knife-wielding assailant Ma'Khia Bryant should have let the unarmed girl die.

So, we must repeat once again, for the people in the back: The Washington Post’s own database of fatal police shootings lists only 14 unarmed Black victims and 25 unarmed white victims in 2019. In 2020, 1,021 people were shot and killed by police but only 55 of them were judged by The Washington Post to be unarmed, so 95% were armed and a threat to others. While any death is a tragedy, there is no epidemic of cops killing unarmed victims. It is manufactured outrage designed to fill up left-wing activist coffers and promote racial division.

And, of course, it also provides Hollywood with films for which they can award and applaud themselves inside their little bubble.