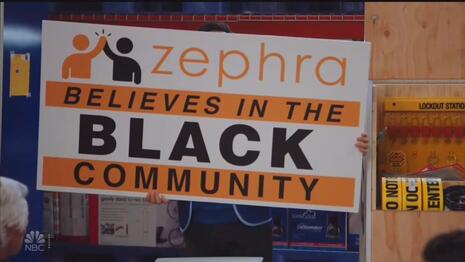 Antifa and Black Lives Matter riots have been destroying major Democrat-run cities across the nation this year, but to woke Hollywood the protests are "99% peaceful."

On October 29, NBC premiered season 6 of Superstore, its sitcom about a big box store similar to Walmart. The episode, "Essential," focused mostly on the role big box stores have played during the Coronavirus and the employees' need for protective masks and gloves.

But the episode also brought up Black Lives Matter protests: a worker asks to clock-out early to attend a protest and employees discuss giving a black employee an extra can of tuna: "It's the least we can do for her these days because of... You know."

"Racism," the other employee responds. (Yes, the dialogue is really that condescending about a black employee.)

When the store's manager, Amy (America Ferrera), calls a staff meeting to unveil a box of PPE from corporate headquarters, the box reveals materials to protect against looting instead.

Amy: Okay, we're going to keep this meeting short today because I have to jump on another call. But look at what came today! Safety supplies! What is that?

Jonah: Of course, you see what we did wrong, guys? If you wanted to be protected by corporate, you should have been merchandise.

Employee: Hey, if the protests are gonna continue, we need to protect the store from looters.

Jonah: Oh, come on. The looting is overblown. 99% of the protests have been peaceful.

Employee: I'm just saying. I got into a Best Buy through a window.

Jonah: There are also these signs to put up.

Garrett: "Zephra believes in the Black community"? What are we, ghosts?

Amy: Yeah, we're not putting any of that up. But if anybody asks, we put it all up.

This episode premiered the same week as footage went viral of a Walmart and other stores being looted during "peaceful protests" in Philadelphia. Damage to property from riots across the country this year has already cost over $1 billion.

But the audience is supposed to pretend that a major store chain does not have to be concerned about looting and the employees and manager should feel annoyed if they do. Left-wing Jonah, who supposedly cares about the working man, flippantly dismisses the importance of "merchandise." Like most "woke" leftists, he fails to account for how communities rely on local big box stores for goods and supplies. Poorer and working class individuals without adequate transportation to go elsewhere suffer when those stores are looted. Past riots in the U.S. are what led to "food deserts" in the first place.

But for the Hollywood left, the "narrative" must be maintained at all costs. So riots have been "99% peaceful" (which is even higher than the laughable 93% peaceful calculation from one leftist study that made headlines in September.) Do not look behind the curtain at the billions in damage, the dead and injured, and the lost jobs and businesses burned down.

Left-wing elites from Michelle Obama to Hollywood writers tell us the protests are "mostly peaceful." And there is also a bridge in Brooklyn they would like to sell us.

The only worthwhile moment in the Superstore scene is the character Garrett's reaction to the corporate office's pandering woke slogan. This year's attempts by major corporations to submit to the BLM shakedown got them nowhere. Major corporations donated millions and parroted Black Lives Matter rhetoric only to be looted and damaged anyway.

It never works to submit to a "mostly peaceful" mob.

This rant was brought to viewers by Lexus and Maserati. You can fight back by letting these advertisers know what you think of them sponsoring such content.