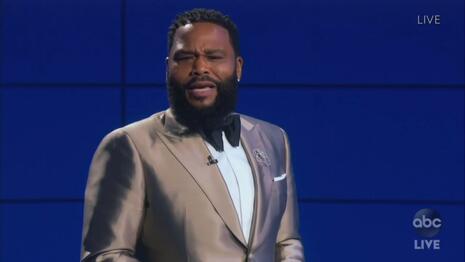 ABC's presentation of the 72nd Emmy Awards on Sunday, September 20, was a cringe-fest of bad jokes and poor visuals, made worse by the lack of a live audience. One of the more awkward moments came when actor Anthony Anderson, star of the ABC series Black-ish, presented an award for Best Limited Series.

Prior to announcing the nominees, Anderson gave host Jimmy Kimmel and the audience his race-centered views on what the awards show would have been without COVID this year.

Anderson: All right. J.K., before we announce the nominees, I have a few things that I'd like to say.

Anderson: Yes, I do.

Kimmel: Because in rehearsal, I thought we decided --

Anderson: We have a record number of black Emmy nominees this year, which is great. This is the part where the white people start to applaud.

Anderson: Thank you, Jimmy. This Emmys would have been NBA all-star weekend and Wakanda all wrapped in one. This was supposed to be the blackest Emmys ever. Y'all wouldn't have been able to handle how black it was gonna be. But because of covid, we can't even get in the damn building.

Anderson: These Emmys would have been so black, hot sauce in your purse black. Howard university homecoming black. You fit the description, black.

Kimmel: That does sound great, and I wish we'd --

Anderson: We would have had speeches quoting our great poets, like Maya Angelou, Langston Hughes, Cardi B. "Wap," Jimmy.

Anderson: But instead of that sexy melanated energy, here I am, alone in a sterilized green room, trying not to sneeze on a llama. What a damn shame.

Kimmel: It was actually an alpaca.

Anderson: Don't whitesplain it to me, Jimmy.  It should have been a pit bull. But no, not tonight. This isn't what it should have been. But you know what? I'm still rooting for everybody black. Because black stories, black performances, and black lives matter. Say it with me, Jimmy.

Anderson: Louder, Jimmy. Say it so that Mike Pence can hear it.

Anderson: That's right. And because black lives matter, black people will stay home tonight. To be safe. Which is fine, because guess what? Y'all don't know how to light us anyway. Jimmy, I'm glad I got that off my chest.

Kimmel: I am, too. It was my pleasure. You know that.

Where to begin with this speech? There are no individual human beings in Anderson's framing. Everything is racialized. Kimmel is just one of those "white people" who is supposed to applaud and nod on cue. Anderson is only rooting for black nominees. (Shouldn't he hope for the best nominees to win regardless of color?) And his statement, "Y'all don't know how to light us anyway" is dripping with contempt for millions of Americans.

Kimmel replies like an awkward puppet when he is ordered to yell louder. Are these men adults? The reference to Mike Pence is just more tired partisan ideology. Presidential candidate Joe Biden, not Mike Pence, has had the long history of negatively stereotyping black Americans. Biden's notorious "Corn Pop" speech, for example, would have never come out of Pence's mouth.

Anderson's lecture was uncomfortable for both the men on the stage and the audience watching. Ratings for the Emmy Awards show have been in freefall for years and with good reason. Nobody wants to be lectured at with speeches like Anderson's that manage to be both ideologically predictable and insultingly bizarre.