Ditka to Kaepernick: ‘If You Don’t Like the Country, Get the Hell Out’

For reason number 273 why Mike Ditka is the greatest, and should be made President for life immediately, I present to you “Da Coach’s” comments that he made on Dallas radio in regard to the Colin Kaepernick anthem/flag protest. 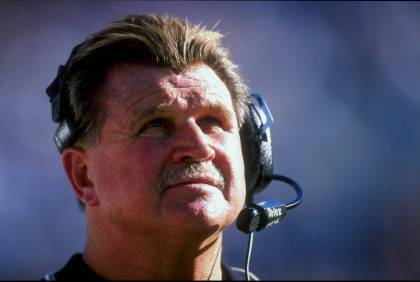 “The Hall of Fame tight end, Super Bowl-winning head coach, and renowned curmudgeon appeared Friday morning with Shan Shariff and R.J. Choppy on 105.3 The Fan in Dallas/Ft. Worth. They asked him about 49ers Colin Kaepernick’s decision not to stand for the national anthem.

Brilliant. Then Pro Football Talk preceded to ruin everything:

“Here’s the thing about having freedoms. If they can’t freely be used, they’re not really freedoms. And while Ditka is free to tell people who make a conscientious decision not to stand for the anthem to “get the hell out,” that attitude reflects a fundamental misunderstanding of what it means to be an American citizen. We can disagree among ourselves without saying to those who don’t see things our way, “Get the hell out.”

Some would say Ditka is the one who should “get the hell out,” especially if he’s looking for a country where it’s not optional to stand for the anthem. There are plenty of countries where folks go to prison for not demonstrating proper respect to the flag; our country has fought against many countries like that over the years.

“I have no respect for Colin Kaepernick,” Ditka added. “He probably has no respect for me, that’s his choice. My choice is that I like this country, I respect our flag, and I don’t see all the atrocities going on in this country that people say are going on.”

If that’s the case, then Ditka either has gone blind or he’s choosing not to open his eyes.

Amazing as it may seem to some, it’s possible both to love this country and to want to improve it. No one tells those who want to “make America great again” that, because they currently believe America isn’t great, they should “get the hell out.” So whether it’s wearing a hat with a slogan or taking a knee during the anthem, there’s a huge difference between striving for change in the country and hating it.

The biggest change we all should be striving for is the development of the ability to respect the opinions of others, even when they disagree with our own. If that would ever happen, we could get back to being the United States of America, instead of the United States of Maury Povich.”

I’m not sure who in this situation is pregnant and wondering who the father is. Which is the only reason why anyone would need Maury Povich involved. But, I digress.

To be clear, Ditka never said that Kaepernick didn’t have the right to protest. He just questioned why someone who thinks he lives in an oppressive, racist state, who also possesses the means and freedom to leave, would elect to stay?

As far as being “blind to atrocities,” please. The percentage of police use of deadly force, matched against number of arrests made, is an infinitesimally small number, with very recent examples of officers held to account when they’ve been found using deadly force unjustifiably.

So, there. Ditka wins again.