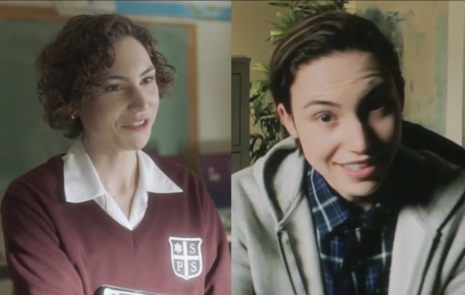 We all know where Disney stands on Florida’s new anti-grooming law, “Parental Rights in Education,” so it comes as no surprise that Disney-owned ABC has introduced a trans student storyline in one of its most woke shows, A Million Little Things.

The student is a biological female who comes out for the first time to her teacher, announcing she’s “not a girl,” and that she’s ready to tell people “who (she) really (is).”

In last week’s episode, “60 Minutes,” filmmaker Rome Howard (Romany Malco) began teaching “Introduction to Documentary Film Making” at the private school he attended as a child. While reviewing video submissions from his class for their first project, he comes across an entry from student Madison (Ash Spencer) that takes him by surprise:

Madison/Maddox: Hi, Mr. Howard. Uh, you said that I could interview anybody I'm close to, so I decided to introduce you to me. Um, I want to go by Maddox, and this is who I really am. I am not a girl. To be honest, I'm terrified right now. I wasn't really sure how I was gonna do this today, but I got my snacks, so, okay. You said to ask tough questions, so, um... Have I ever told anybody who I really am? Not until today. How will my family take it? Honestly, I have no clue. Do I think that I'll ever be ready to come out to everybody? Honestly, I don't know. Until today, I really doubted it. But hearing what you said in class today about your journey and seeing how your film helped you, I can finally imagine a day where I might be able to accept this piece of myself and show it to everybody else.

Are we really supposed to believe Madison/Maddox’s parents would never have noticed her wearing a wig or speaking in such a deep voice? It also wasn’t believable in the least that Rome would be so shocked by her confession when it was obvious she was trans from the moment she first spoke in his class.

The storyline continued on Wednesday’s episode, “Slipping,” as Rome pulls Madison aside after class to discuss something he had no business discussing without her parents’ knowledge or involvement:

Rome: Hey, Madison, can you hang back for a sec? I wanted to talk to you about your video. It had all of the elements of good storytelling. It was raw and honest. With a surprising reveal. It was really beautiful.

Madison/Maddox: Really? You don't know how happy that makes me. I wasn't sure that I should do it, but then after I did, it was like I could actually breathe for the first time.

Rome: Well, you told your truth. That's really all you can ask for in a documentary. You should be really proud, Madison.

Madison/Maddox: Uh, Maddox. That's what I want to go by.

Madison/Maddox: Uh, seriously, though, I've been thinking about it for a while. I think I'm ready to tell people who I really am.

Madison/Maddox: Yeah. It's just scary, you know, that I might lose some friends.

Madison/Maddox: Yeah, that's what I think, too. And I was thinking, you know, maybe instead of having like a gazillion awkward conversations, um, it may be better to just rip the band-aid off. And what better way to do that than on Picture Day? Thanks for this pep talk, Mr. Howard. I really needed it.

Real friends would be concerned that Madison doesn’t feel like a girl when biology says otherwise, and they’d want to help her get to the root of her gender dysphoria rather than cover it up. Pretending Madison’s confusion is normal and that she’s really a boy isn’t “truth,” nor is it accepting Madison for who she really is. It’s the exact opposite, and people who battle this disorder deserve better.

Unfortunately, pretending and lying is now the accepted norm in our culture, despite evidence that transitioning does nothing to improve mental health. In fact, the suicide rate among those who transition is 19 times higher than that of the general public.

Rome later sees Madison/Maddox enter the boys’ bathroom to get ready for Picture Day and begins to fear she might become a target for bullies once she officially comes out. Though it’s understandable if students were to express discomfort with the bathroom issue, there’s no excuse for hatred or bullying for any reason, and every person deserves to be treated with love and dignity no matter their differences.

That kindness should go both ways, but today’s culture vilifies anyone who doesn’t toe the woke line as racist, homophobic, transphobic, etc. You must think, vote, and act as they do or else be canceled.

So, of course, A Million Little Things is already setting the stage for an upcoming evil parents versus heroic teacher plot, as Madison’s mom and dad apparently weren’t okay with pretending their daughter is their son:

This isn’t the first time the show has touched on the issue of transgenderism, but the teacher/parents angle is new and definitely not a coincidence. ABC and Disney have continuously ignored the fact that viewers don’t want liberal agendas like this mixed into their entertainment. Let’s hope their persistence in pushing propaganda leads to them canceling themselves.

Conservatives Fight Back! This episode was sponsored by Panera Bread, Taco Bell, and Capital One. Click each advertiser for their contact information so you can let them know how you feel about this propaganda.